Nearly a month has passed since we virtually celebrated with supporters our petition achievements: over 1500 signatures from the public in what has been the most unexpected year for a century or more. We’ll reflect further more about what went well and what did not in a separate blog post soon.

Today I cycled over to Town Hall Extension and handed all 800 or so of the paper signatures we collected to Manchester City Council’s Governance and Scrutiny Support team (their offices have only recently reopened since coming out of second lockdown last week). We hoped that total number would have been higher – enough to get us to the 4000 needed to trigger a full council debate on the issue. But petitions and pandemics aren’t the best of bedfellows. 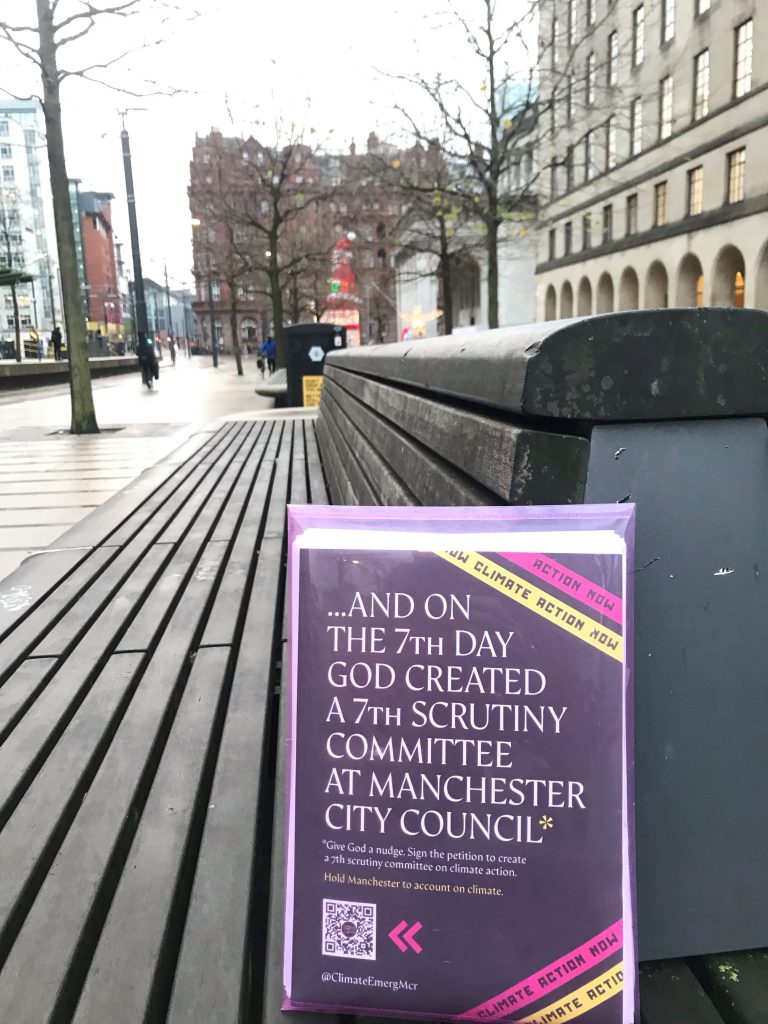 It’s worth recognising that Climate Emergency Manchester has been the most successful citizen-led group both collecting online and paper signatures. We’re only aware of one successful petition to trigger a full council debate, led by Manchester Evening News in 2016 on the ‘the north is not a petri dish’ graffiti laden wall in Piccadilly Gardens. It’s only taken more than 20,000 signatures, a full council debate and 4 years with frequent vocal support from Councillor Pat Karney to have something done about that issue… Still, we expect this petition to trigger a debate at a Neighbourhood and Environment Scrutiny Committee with a 5 minute speaking slot for us – let’s see where that gets us…

We’ve come some way to get this far with our petition, but there’s still a lot of work to do in demonstrating greater popular support for increased council action on climate change. Fine words are free-flowing, sometimes they splash out on some well designed graphics. But we need action to do anything about reducing harm from climate change – both in our own city and for those on the front lines of the hurricanes, typhoons, floods, heatwaves, wildfires and droughts.

As we were always aware of the potential additional admin burden we were creating for the council in times of limited resources, in February we put in place a validation spreadsheet and will be offering this to them. The spreadsheet is sequentially numbered to check that each signature we ‘count’ has the necessary information required to be valid. This includes whether they live / work / study in Manchester and have provided a recognisable address in Manchester. For those not associated with the universities we’ve checked the postcode on https://www.writetothem.com/ to confirm that it’s within a Manchester City Council ward. From this we definitely know we’ve covered 31 out of 32 wards – narrowly missing Sharston by being on the wrong side of the railway tracks. Considering we have another 771 online, we hope at least one of those is from someone from Sharston! We’d be very interested in anyone who lives round there or anyone else from the north or east of Manchester and wants more action on climate change from the Council to get in touch.