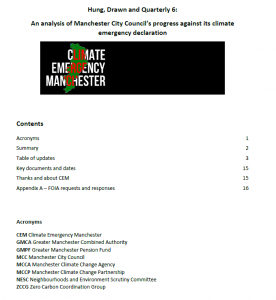 Today we release the latest “Hung Drawn and Quarterly”  report (pdf and word). We have been producing these assessments – based on Freedom of Information Act requests – every three months since the 96 councillors of Manchester City Council unanimously voted to declare a “climate emergency” a hundred years ago, back in July 2019.

The report, like others before it, reveals that no progress has been made in a number of key areas:

“In July 2019 all councillors voted to declare a climate emergency. Over the last 18 months our reports have shown that the Council has been failing to keep any of its promises, or even to scrutinise and report on them.  Citizens of Manchester, present and future, deserve better. A seventh scrutiny committee, dedicated to climate policy, is clearly urgently needed.”

The report recommends concrete steps, such as

There are a number of steps that need to be taken immediately. These are:

Climate Emergency Manchester will be continue to campaign for a real response to the climate crisis.  It is hosting an online meeting on Monday 11th January, at 8pm, details on website. It is also urging members of the City Council’s Resources and Governance Scrutiny Committee to allow all councillors to vote on the creation of an additional scrutiny committee, devoted to climate policy implementation.