The tl:dr The council is getting away with not even looking at its climate policy failures. Climate Emergency Manchester is trying to change that via a) our Hung Drawn and Quarterly reports b) this sort of thing below.  c) If you want to chat with us, our email is contact@climateemergencymanchester.net and we have an online meeting on Monday 11th January from 8pm to 845.  Oh, and d) date for your diary – Tues 9th Feb, we are at Resources and Governance Scrutiny Committee, asking that they give the whole council a vote on whether to create a seventh scrutiny committee.

Manchester City Council has 96 elected councillors (93 are Labour, 2 Lib Dems and 1 independent). They are supposed to develop and oversee the implementation of policies – so, when a “climate emergency” is declared, as it was in July 2019 – you’d hope to see these elected representatives putting real pressure on the civil servants employed to deliver.

There is an 8-member  “Strategic Management Team” of civil servants, on serious money (6 figures per annum). They are supposed to help set policy and implement it. They have directors of this, deputy assistant directors of that, etc.

Ten times a year, six “scrutiny” committees meet to see if things are being done.  These committees are made up of elected councillors. Several of the committees have only Labour councillors.  The meetings of these committees tend to last for about two hours. Anywhere between 3 and 5 items are discussed.  For each item there is a written report, and published the week before. On the day itself a senior councillor and a senior civil servant (often a member of the Strategic Management Team) come along and respond to questions (sometimes they even answer the questions).  There’s a lot of chest-beating and every-so-often a minor concession is made to democracy, and something actually changes.

One of the six scrutiny committees – Neighbourhoods ‘and Environment’ Scrutiny Committee – is supposed to be keeping tabs on climate change. It hasn’t had a single agenda item on climate since July 2020 (when it was revealed that the city has burnt a quarter of its carbon budget for the entire 21st century in the last two years).  Not a single one.  That’s why Climate Emergency Manchester is calling for an additional scrutiny committee to be created, that is dedicated to climate policy. We will be putting the case to Resources and Governance Scrutiny Committee on 9th February, asking them to send the recommendation to full Council for a vote.

Here below are the agendas for the six scrutiny committee meetings for January.  We are busy sending emails to individuals and groups who we know have an interest in specific items and issues.  Please do the same. The more people who know about what scrutiny is and how it works, who then ask councillors on the committees to actually ask decent questions and keep asking until they get an answer, the more chance we have of getting some sort of response, however feeble, out of the Council. 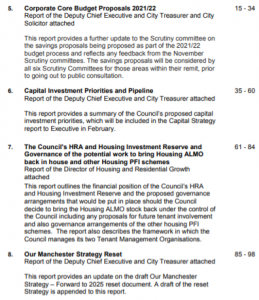 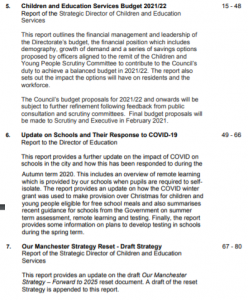 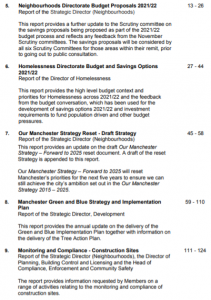 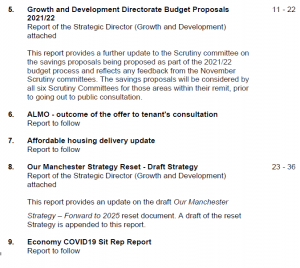 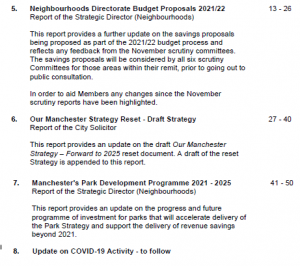