CEM is nearly two years old (more of that soon).  Sometimes people have asked “so what are you all about?” and we have mumbled answers of various coherence and silkiness about “holding those in power to account for all their fine promises,” “keeping each other sane during the apocalypse” and so on, before pointing over the asker’s shoulder and saying “look, a squirrel!” and then legging it while their head was turned.

Over the last two months or so we in the core group of CEM have been through a bit of a soul-searching (we found it down the side of the sofa with some loose change, dusty lollipops and, well, this blog post might get read by children….).  And we’ve come up with – drumroll please – not one, but TWO aims (there was a BOGOF at the aims supermarket, go figure).

For us to thrive as active citizens (in a broader ecosystem of resistance that includes close supporters, allies and interested by-standers). That is, we as CEM sustain ourselves and support each other, to grow in numbers, in skills, in relationships, and to ensure the conditions under which we as individuals within the group, the group as a whole, and its allies continue to thrive.

To use the power that this thriving gives us (skills, knowledge, connections, credibility etc)  to put consistent and substantial pressure on Manchester City Council and other local centres of political, economic and cultural influence, so that Manchester’s responses to climate change are rapid, radical and do not harm the poorest and marginalised in society.

Most everything we have been doing has been around these two already (and retconning is a thing, after all), so you probably won’t notice any change now that we are no longer aimless. 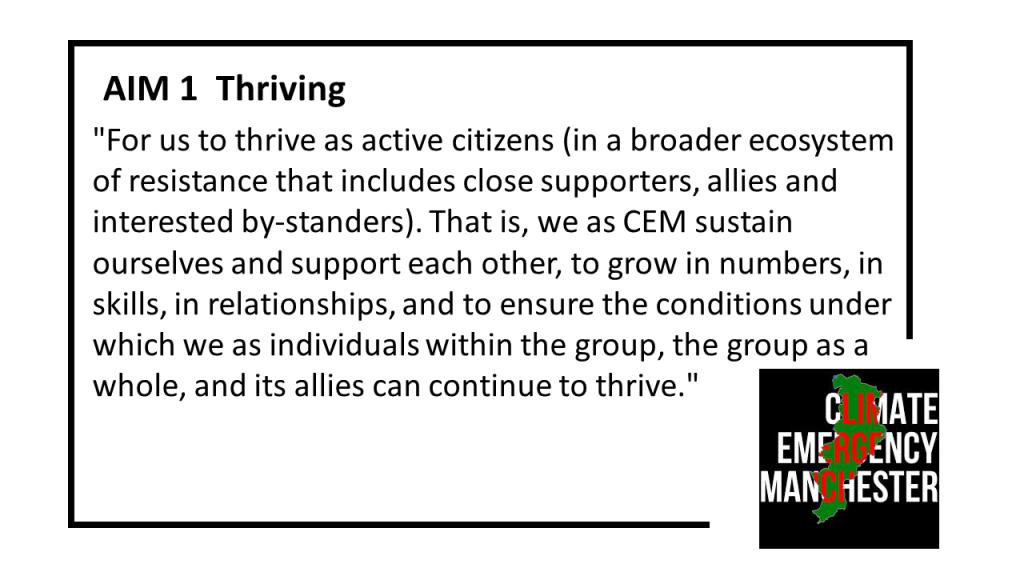 By thriving we mean gaining skills, maintaining relationships and integrity (the two might be in tension, and we are more likely to go with the second of those – sorry if ya don’t like that). We have seen groups go up like a rocket and down like a stick, with people crushed by the g-forces or the sudden splat at the end. That’s not us (we hope).

We also are gonna keep it local, no matter how comforting it might be to believe that Mr Musk, Mr Biden or somebody else might Solve Everything if appropriately pressured/protested. 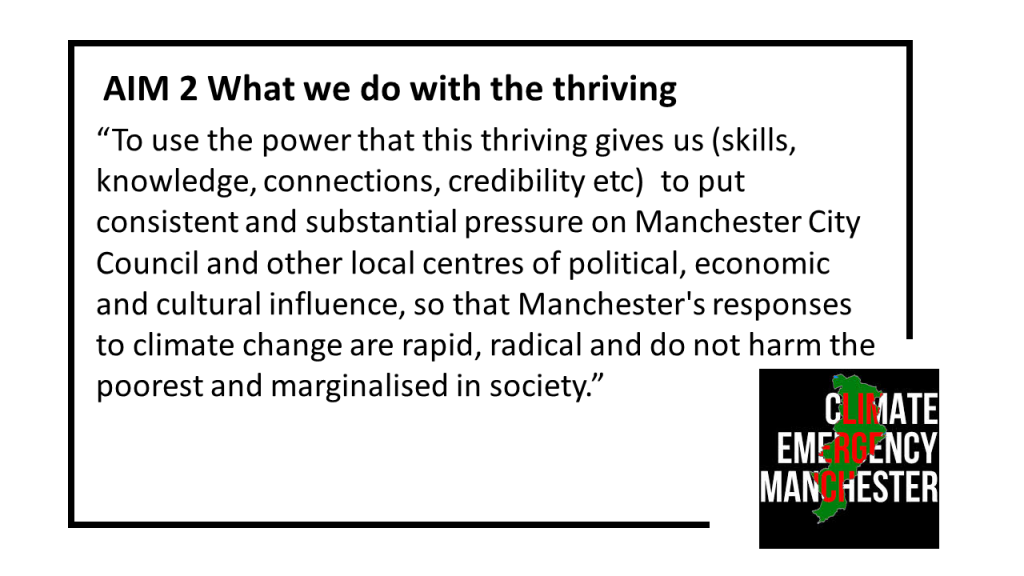 But that is for another time.  For now, look upon our aims, ye mighty, and despair/applaud,/something in between….