Ahead of next Monday’s webinar with Noam Chomsky, Marc Hudson gives the briefest possible heads up on why you should know about his work… 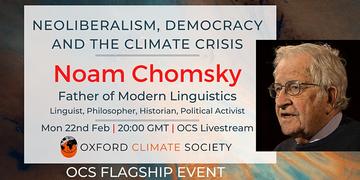 Noam Chomsky was born in 1928 in Philadelphia. The son of a rabbinic scholar..  well, the short version is this, he became a PhD student and published a linguistics PhD, which changed everything in linguistics.  In 1965, he decided he couldn’t sit on the sidelines anymore, he had to get involved in the movement against the Vietnam War (the United States had reneged on a peace deal in 1956, and not held elections, because they knew the “wrong side” would win. They instead still installed a puppet government in South Vietnam and helped it suppress any and all dissent. After a faked “incident” in 1964, they started sending a lot of troops.

And, as Chomsky knew, once he got involved, his commitment would go on and on. In the late 60s, with the US Government trying to stem domestic resistance,  also expected to go to jail for a serious amount of time, (his wife went back to grad school, so someone would have the cash to raise the kids). Chomsky has stayed active ever since. He realised early on that he wasn’t a good organiser so he stuck to producing analysis. non-stop, relentless, alongside his linguistics work, which I don’t pretend to understand. a stream of articles, books, speeches, letters. Absurdly well-informed, his work is rigorous, and painfully clear about the choices that we face as citizens of countries where there are – thanks to past struggles – formal freedoms around speech, assembly and information.

He said this about climate change in 2003.

.“Well, it’s been obvious for centuries that capitalism is going to self-destruct: that’s just inherent in the logic of system―because to the extent that a system is capitalist, that means maximizing short-term profit and not being concerned with long-term effects. In fact, the motto of capitalism was, “private vices, public benefits”―somehow it’s gonna work out. Well, it doesn’t work out, and it’s never going to work out: if you’re maximizing short-term profits without concern for the long-term effects, you are going to destroy the environment, for one thing. I mean, you can pretend up to a certain point that the world has infinite resources and that it’s an infinite wastebasket―but at some point you’re going to run into the reality, which is that that isn’t true.
Well, we’re running into that reality now―and it’s very profound. Take something like combustion: anything you burn, no matter what it is, is increasing the greenhouse effect―and this was known to scientists decades ago, they knew exactly what was happening. But in a capitalist system, you don’t care about long-term effects like that, what you have to care about is tomorrow’s profits. So the greenhouse effect has been building for years, and there’s no known technological fix on the horizon―there may not be any answer to this, it could be so serious that there’s no remedy. That’s possible, and then human beings will turn out to have been a lethal mutation, which maybe destroys a lot of life with us. Or it could be that there’s some way of fixing it, or some ameliorating way―nobody knows.”

And in 1992 he said this about social movements.

“The way things change is because lots of people are working all the time, and they’re working in their communities or their workplace or wherever they happen to be, and they’re building up the basis for popular movements. In the history books, there’s a couple of leaders, you know, George Washington or Martin Luther King, or whatever, and I don’t want to say that those people are unimportant. Martin Luther King was certainly important, but he was not the Civil Rights Movement. Martin Luther King can appear in the history books ‘cause lots of people whose names you will never know, and whose names are all forgotten and who may have been killed and so on were working down in the South.

Chomsky, by his example, and his clarity, has inspired and instructed and encouraged millions of people.

Climate activists need to think seriously about their dedication, their clarity, their seriousness, This is not a damned boom-and-bust game, where we have organisations go up like a rocket and down like a stick in two years, demoralising and demobilising people, making it harder rather than easier to build movements.. This is the struggle for the survival of our species. And right now we’re getting our asses kicked by people who literally do not care what happens after they die