Rosetta Ceesay, a stalwart CEM supporter, writes about her work in The Gambia.

The Gambia, West Africa is a small country stretching from the mouth of the wide River Gambia inland, winding along at either side of the riverbanks.  It is the smallest, poorest country in the Continent of Africa and it is semi-arid as is the entire Sahel region.  The country is 50 Km or 32 Miles wide.  The River Gambia is 10 Km or 6 ½ Miles wide where it meets the sea.  The mouth of the river is salinated, and as sea levels rise, so is some of the river waters inland. The Ministry of Agriculture confirmed that a third of the rice crops are now depleted.  I noticed the Mangroves depleting as far back as 2003.  The women who make a living gathering seafood in the mangrove swamps noticed that they were making less money due to the mangroves depleting, so they started planting mangroves to protect their income.  Other Groups such as Green Up Gambia plant some once in a while. 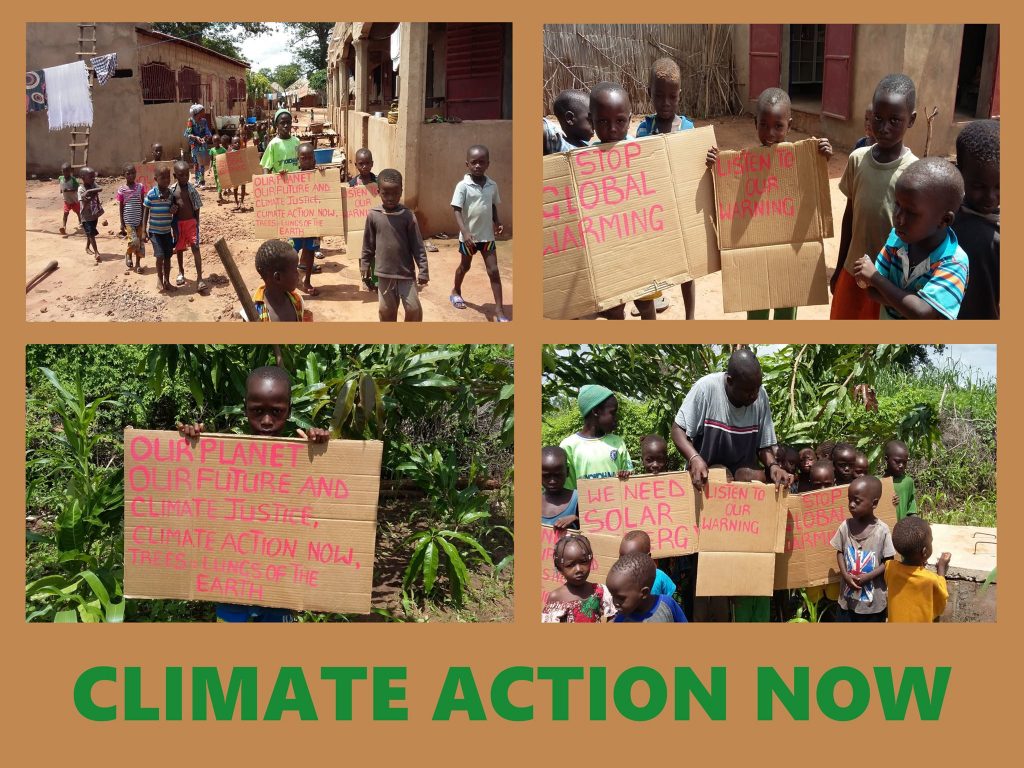 I normally spend 4 months each year in Gambia.  Since 2003 each time I travelled there I notice the coastline was is eroding.  Whilst some of the sand was being taken for building, this didn’t account for all of the erosion as the Government were quick to put a stop to coastal sand mining.  The capital city, Banjul which is the Sea Port, is an island which has been buttressed due to sea waters rising and soil erosion.  Parts of Banjul flood during the rainy season.  Over recent months the Government has reclaimed part of the coast at Port of Banjul to widen the area as shipping has been affected and more space was needed for Container Ships such as Maerskline to drop off containers. The battle with rising seas continues.

I studied Climate Change courses with Futurelearn as I could see the evidence of climate change with my own eyes. The people of the islands knew that seas were rising, and people from Rofangue island  talked to me about it in 2017.  The women who grew rice on one of the island told me that they had to move further inland in 1992.  By then the lower coastal area housing had all gone.  “Taken my the sea.”  The fishermen there claimed that mangrove depletion had led to them catching less fish.  Two other nearby islands, Velingara and Baout, had the same problems and also drinking water being salinated so they had to dig boreholes further inland. These islands built concrete barriers but the sea still rose and battered these sea walls, finding its way in through cracks.  Children would wake up on wet beds. (Sleeping on mats on floors.)  Cockles, and sea snails were fewer. Those on the coast had to travel inland and pay for containers of drinking water.  Life got worse when the Rainy Seasons became erratic. Heavier rains and difficulties cultivating rice. Higher temperatures and more desertification.  This was when an organisation gave them some money telling them to plant mangroves, so they did.  Men and women.

Other islands were not so fortunate.  Some shrinking islands are now beneath the sea.

I know the country well as my in-laws are Gambians and I go inland to a village not even seen on Google Maps. The nearest place to it is Njau, and from there I travel inland over dirt roads through semi-desert to the family home and 3 villages which are in close proximity to each other.  It is a farming area and life is hard there.  Inland I knew that reforestation was needed.

On the coast I had seen the sea moving further inland to where people once lived and sat outside houses cooking on charcoal fires.  What was left of the sand there was blackened by the years of charcoal cooking fires.  I knew that in the villages they cut mainly dead trees, and gathered dry scrub grass, but some trees were cut for making charcoal.  Working along Sustainable Development Goals I thought that planting cashew trees and fruit trees would deal with this issue also would provide food.  They have never in our years of planting, cut any of the trees down.

We planted 72 cashew trees in 2017 when Grenfell fire took the lives of my friend Khadija Saye, her Gambian mother, another Gambian lady who were 3 of the 72 victims.  Four years on the forest is producing cashews.  We have planted assorted fruit trees across the village with the help of our Children’s Gardening Club who are also Climate Activists.  The total of trees now stands at 412.  We have a Solar water pump borehole with reserve tank and public taps. The area around the old well is now what we would call allotments but they call women’s gardens. We do what we can to try to mitigate the effects of Climate Change while at the same time ensuring that there is no malnutrition.  Other villages are not as fortunate as ours.

Young people are leaving the barren land heading to the towns and two major cities looking for work and finding none.  Despondent, too many “go backway” which is what they call irregular migration.  They fear famine, and think they will have a better future somewhere else.  This leads to deaths in the sea, human trafficking and many missing people.  For 6 years now I have warned the UK Government that they must do something about Climate Change or be aware of the consequences of Famine Refugees, and Climate Refugees.  Talk of a Green New Deal has dragged on so long the situation seems dire.

Gambia itself is doing some good work though, and the pandemic has not fully stopped things such as beach cleans, planting mangroves and trees.  With nearly 50 per cent of its total land area under 20 metres above mean sea level, one-third at or below 10 metres above sea level, and 10 to 20 per cent seasonally or diurnally flooded, The Gambia has problems. There are tremendous pressures on natural resources and ecosystems.

In November 2020 the Permanent Secretary of the Ministry of Environment praised the country for “the giant steps” they had taken towards mitigating and addressing the effects of Climate Change.  In his speech the Permanent Secretary Mr Jabang  mentioned things such as Gambia had benefited from The World Bank Climate Invests Funds (CIF) Pilot Project for Climate for Climate Resilience (PPCR) Funding.  At the Conference PS Jabang also spoke of a 25 year investment plan and commitment to the Paris Agreement.  This sounds hopeful.