CEM is two! To celebrate, we are releasing a special, extra-short version of the guide to “Who gets to be in the gang? A beginner’s guide to legitimate peripheral participation.”

This release is part of saying thanks to everyone who has provided support over the last couple of years. Many people have given support in lots of different ways, including little actions and large. It all adds up and it all matters. 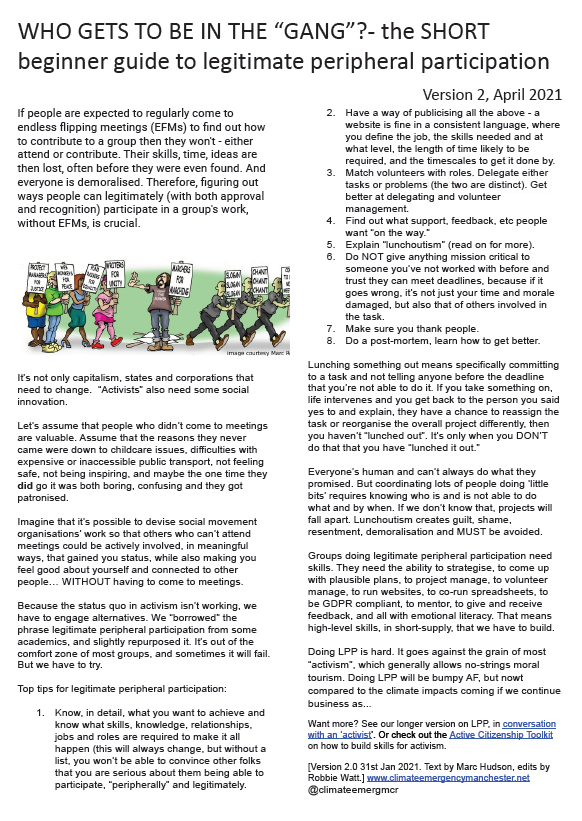 Engaging with our supporters is essential to building something that looks like a social movement. The core group are few, but with help it is possible to make a perceptible difference. Even if that difference is small in comparison to the scale of the mounting climate crisis we face up to, it would be smaller still without effective participation from supporters.

We want to enable people to be part of climate activism locally, but doing this is not as easy as it sounds. It takes skills, energy, strategising, and more. That’s why we want to help build a conversation about what is involved in providing support, and how that support can be facilitated. It’s about how people can join the “gang”, and participate, even peripherally, in a legitimate way. We are starting to talk about this in terms of supporters ‘doing their bit’ in orbit.

If you would like to do your bit in orbit – or fancy trying out our attempts at ‘legitimate peripheral participation’ – then drop us an email!  contact@climateemergencymanchester.net