Climate Emergency Manchester are asking candidates standing for election to Manchester City Council if they support three simple commitments on climate action. So far, ten Green Party candidates have expressed their support, as have 6 Lib Dem candidates and one Tory. Only two have said no – one Labour, and one Conservative candidate. 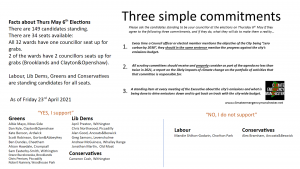 We were getting worried about the other Labour candidates because we hadn’t heard from them – holidays in the spring sunshine, hopefully, rather than anything more serious? But this afternoon we were pleased to hear back from the first Labour candidate to support these three climate commitments: Debbie Hilal, who is standing for election in West Didsbury.

Debbie Hilal wrote to Robbie, a constituent in Didsbury West ward, to say: “I will, of course, support the three commitments you have sent”. Debbie also said “I would like to see the zero carbon emission policy reduction being reached by 2030 not 2038” and “I will, of course, be campaigning and pushing for stronger action on Climate Change to be made a priority if elected as Councillor”.

These are exactly the types of statements we like to hear from people standing for election in Manchester, and we hope to hear more of this talk from other Labour party candidates in the coming days.

Please contact all the candidates in your ward, ask them their position on the commitments, and share what answers you get with us.  Our email is contact@climateemergencymanchester.net  Our Twitter is @ClimateEmergMcr and we are using the hashtag #ClimateVoteMcr