In April, the climate charity Hope for the Future organised a webinar about Manchester’s carbon emissions, especially the emissions associated with consumption. This includes MORE emissions linked to Manchester but not counted by its authorities. A recording of the event is available if you would like to watch it. This blog offers some background, a summary of some important points raised (and not raised) at the webinar, and thoughts about what this means for CEM’s Operation Climate Honesty (OCH).

The animating question of this event, and a major struggle of our times, is how to get institutions to take responsibility for rapidly reducing emissions of greenhouse gases (most especially carbon dioxide) that are wrecking the planet. These emissions are pesky things and they generate questions about whose emissions they are, where are they, how they get counted, etc.

In Manchester, the City Council set a target for reducing emissions to zero by 2038 and set an emissions budget for the city, in dialogue with the Tyndall Centre, to fanfare: “one of the first cities in the world to set targets in line with the Paris Agreement”. Having set the target and budget the Council seem to expect the Manchester Climate Change Agency, an arms-length body with a very limited track-record of achievement, to lead on delivery. We often hear that the Council can’t be expected to deliver this directly (stop being so demanding, is the implication, which is so strange because we are asking for delivery of what was promised).

In 2020 the Agency disclosed – reluctantly, by burying the information in the footnote of an annual report, and then refusing the topic of conversation at the short ‘conference’ event to accompany the report – that Manchester burned through more than a quarter of the remaining emissions budget for this century in just a two-year period. This creates the distinct possibility that Manchester will soon be one of the first cities in the world to both set a science-based target compatible with the UN Paris Agreement, and to subsequently destroy it.

The Council has recognised consumption-based emissions in its action plan, which says: 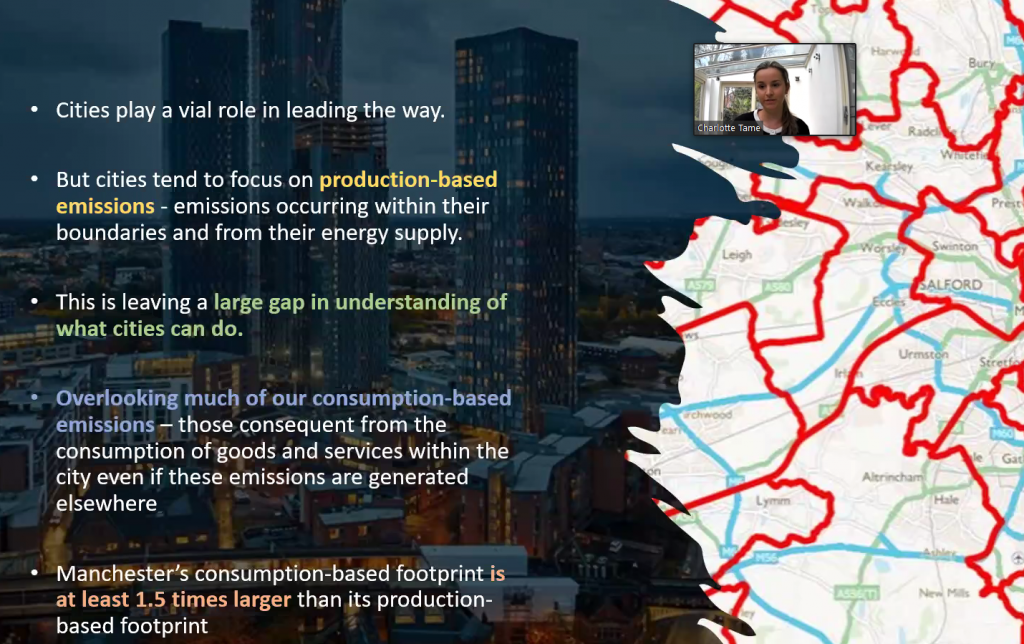 The academics on the webinar – Joe Blakey, Chris Jones, Jo Mylan and Claire Hoolohan – emphasised that consumption-emissions are hard to track and monitor but that they are nevertheless important and need to be tackled. Drawing attention to these emissions highlights the need 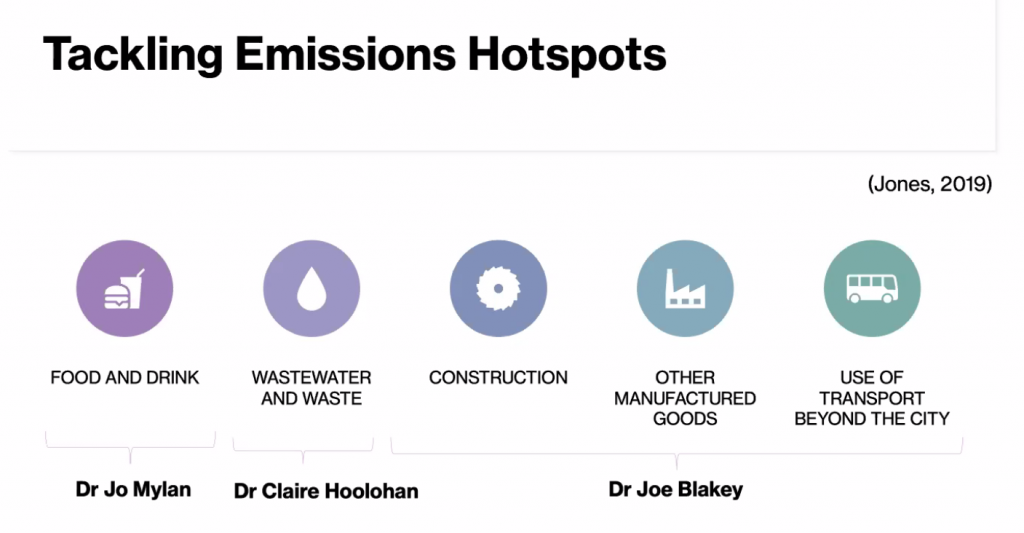 The hotspots mentioned included hot food, hot showers and, ehr, hot lots of other things. Food emissions are significant but they don’t get counted because of complex supply chains. Water use remains a black watery box – apparently, we still don’t understand watery emissions from homes very well. Then there is all the waste, the flights, the embodied emissions in materials used for demolitions and constructions, and more.

Thankfully the proposals at the webinar were not just to target and nudge individual consumers (phew, that would have been done a few times before with poor results). Some of the options raised were

Many of these are good ideas. Others are included in the associated report. However, I was left wondering where the leverage is to get these things to happen, and soon. We know that such proposals are needed, the tricky question is who is going to do them? Who is going to make such things happen?

Communicating ideas and proposals through reports and events may be part of the process and getting some politicians to listen helps too. Local Labour MP Jeff Smith was on the call.  He said he welcomed these ideas (1). But there needs to be some recognition that many of these things are not currently happening and that we will struggle to get them to happen soon without leverage.

Jeff Smith said we need to see the levers to pull. I’d say we need some strategising about the processes – yes, CEM is process obsessed – through which our local elected politicians and powerful institutions will seek out the levers, feel them, and pull them. That will require (many more) activists yanking at chains (ours or theirs, you decide). Because how else to speak up, to make the story of Manchester’s emissions plain, to help tackle inequality, and to make it more likely that actionable proposals are acted upon?

If you would like to be (more) involved with CEM, send us an email:  contact@climateemergencymanchester.net

(1) Although MP Jeff Smith welcomed ideas generally, he also pushed back on tackling Manchester airport’s emissions by saying it’s a national issue more than local, which presumably allows him to help his friends in the Council to avoid doing anything much about this hot aeroplanes-burning-through-emissions spot.

1 thought on “Och not MORE emissions by Manchester”