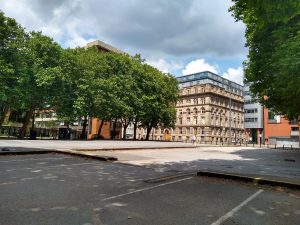 trees in Manchester city centre.  A Tree Preservation Order (TPO) was granted by the Council, after a determined campaign by local residents, supported by local councillors, urging the Council to preserve some of the few mature trees in the area. Nearly 500 people signed a petition to protect the trees, and the Council’s legal services department saw a large number of emails and letters of support for the TPO.

The campaign started 18 months earlier after I – like many other city centre residents – started taking a lot more notice of my surroundings while undertaking lockdown exercise (my neighbour’s dog has never been so well walked…).  As the 31 large London planes between Aytoun, Minshull, Major and Bloom Streets began to unfurl their fresh greenery in that peculiar spring of 2020 I belatedly realised what a magnificent sight they were.  I asked the Council if they were protected, they said no but at first seemed like they agreed that they should grant them a TPO.  Then, as often in dealings with the Council eh?, things seemed to get complicated and people stopped replying to my emails.   If they’d known me they would have realised that that was only going to make me more determined… I roped in neighbours to form a campaign group, involved a local councillor, set up social media accounts and set to work.  We enjoyed taking part in the online Urban Tree Festival in May, sharing research about trees and old maps of the area etc on Facebook each day during the Festival, culminating in a terrific time lapse video of the trees coming into leaf this spring, compiled by a resident with a great view of them out of his window.

I started a petition on 38 Degrees which is quite flexible and doesn’t spam people who sign up – but later wished I’d known that Manchester Council has its own little-publicised space on its Web site to set up petitions. Mind you, you do have to provide a Manchester address to sign such a petition, whereas one of the most entertaining moments of our campaign was when I walked along the line of people queuing for their Manchester Pride tickets and got 60 quite-possibly-out-of-town signatures in half an hour simply by brandishing a large laminated QR code, for folk to be able to use their phones to sign the petition quickly while standing directly under the trees they were helping to protect…

Even at the point in August where we got the welcome news that the Council had put a provisional TPO on the trees we couldn’t relax, as we were concerned that the landowner, who would be forced either to protect the trees or to make a formal request to cut them down if the TPO was granted, would object to the application. There were also worries that the Council itself might recommend a ‘refusal’ for the application…  So at this point we upped our game, and got people to send large numbers of emails in to the Council’s legal services department in support of the TPO. We were very grateful for the assistance and publicity offered to us by other campaign groups with whom we were now in contact.  Radio Manchester did an interview with me, and we were delighted to have formal support from the Greater Manchester Ecology Unit.

And so, a happy ending – we won. The Aytoun Barks Back tweet announcing our success was liked over 270 times, by local tree groups from Cardiff to New South Wales to Mexico. Heartwarming stuff.  The campaign does not stop here, however. The plot of land which the trees surround is a surface level car park and may well see development proposals in the future; campaigners are clear that the root systems of these tall trees are such that any proposed development could easily damage them. We will continue to monitor plans for the space very closely. Many local residents have suggested that the site would make a superb ‘pocket park’ – already, since it has been closed to cars, people have been seen in the space playing cricket, teaching kids to ride bikes and doing Tai Chi.  That sounds like a great if optimistic campaign to try and get underway – I’m retiring in March so you never know…

In the meantime, we’re both keeping a vigilant eye out for our own trees and staying in touch with other campaigns to see where else we can make a collective difference.  You can follow news of the continuing Aytoun Barks Back campaign to keep the trees safe at facebook.com/AytounBarksBack and Twitter @AytounBarksBack.  Contact us if you have skills in community-building or knowledge of the nuances of the planning system, or know anything about plane tree root systems or ‘pocket parks’!  And I’ll leave you with a tweet sent to us when we announced we’d won our campaign and which made it all feel worthwhile for me – ‘Top work! I walk across that ex car park every day and had decided that it wouldn’t be long before those trees were chopped down not realising until now that someone was fighting for them’.  We were, and we will.

1 thought on “Aytoun Barks Back explains how it was done!”