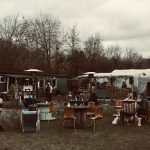 away in a corner of the park, the market gardens (run by the brilliant MUD)  are a haven all year round. For winter, the area has been festooned with lanterns and reclaimed furniture. There was music, mulled wine, food grown on site and, at the CEM stand, a chance to tell us what questions you wanted to ask the Executive Manchester City Council.

We got a broad range of answers, many picking up on contradictions between 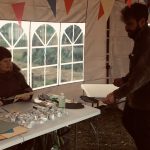 council words and actions. There were queries about transport and active travel, 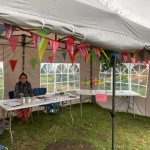 and the state of the roads near Platt Fields (impossible to cycle) . We even learned that one school bus has been cancelled! There were concerns about green space, from Ryebank fields or verges on which weedkiller is still used. Prestige projects like The Factory have engendered mistrust (‘will it receive more bailouts’?) and multiple punters wanted more transparency, or an explanation for conflicts of interest (‘why is night time tsar also a big club owner?’) 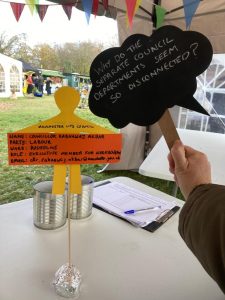 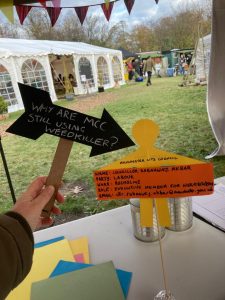 Many visitors to the stall know their local ward councillor. However, few were aware of the Executive or that this small group of councillors has so much say in the running of the city. Nobody knew about the Labour Group, the influential parallel policymakers hidden from public view. Councillors run surgeries all year round, but how many explain how things work to their constituents? Based on experience, more and more people – many of them worried about climate change – are asking how and why certain policies get prioritised.