The piece below is re-posted from All Our Yesterdays: 365 Climate Histories. We’re delighted to be co-hosting an online event ‘What can we learn from the death of Abbey Pond?’ with AOY next Thursday, 24 February. Sign up here if you want to better understand how today’s activists can learn from past attempts to save green space in Manchester

On the 15th of February 1994, a brilliant anti-bullshit piece of political theatre took place.

Picture the scene. In a few months Manchester was supposed to host a major international environmental event. But 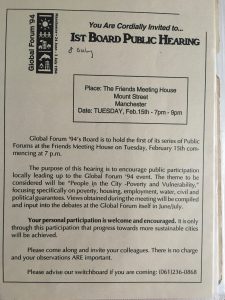 amidst budget cuts and cost blowouts the organisation in charge had just lost its second head honcho in six months.

Meanwhile, the Council was embroiled in a high profile physical battle with well-connected, brave and intelligent people trying to protect a site of nature within spitting distance of the city centre (Abbey Pond).

In retrospect, the first (and only) public meeting of the “Manchester Global Forum board was always going to be hard to pull off.

Here’s one witness’s take of the scene

It was in the run up to Global Forum. It’s just beginning to get off the ground. We were quite deeply cynical about this, but they did genuinely try to involve the community, so this was an open meeting to discuss the aims and objectives of Global Forum.

So that was Councillor Spencer,  the figurehead for the Council and other people  named in that press cutting.

Now the enterprising Earth First!ers, and lovely students, were  very creative. They  made papier mache in, buckets, they got some wire, they made a framework. then covered it in black bean bags and made a face and it took 4 people to carry it,  wasn’t heavy, but quite long. And it was our mascot and they christened him Isaac Newt.  He was finished just in time for this open meeting and xxx organised so they could hear it from the newts.  Our pallbearers, just let it all get settled sort of kept in the shadows and then very slowly marched in with Isaac Newt.

No shouting, in silence, marched straight down the central aisle. Up to the dais and plonked very gently  in front of all the speakers and just sat back and enjoyed  the effect

As Unity Stack observes, it ticked all the boxes for a classic stunt:

Every day from Friday 11th to Thursday 24th February,  All Our Yesterdays will be feature posts (sometimes two!) to celebrate the Republic of Newtonia – a brief occupation of a site in Hulme in defence of Abbey Pond (near the Old Abbey Taphouse). In 1994, local people and environmental activists tried to stop the Council and the Science Park from filling in the much-loved pond. If you were there, and want to share your memories (and any photos or other material) please do get in touch via mcmonthly@manchesterclimatemonthly or on Twitter – @mcr_climate

On Thurs 24th, the 28th anniversary of the Pond’s destruction, there is an online meeting, from 7.30pm, bringing together people who were at the Republic of Newtonia with campaigners defending green spaces now. You can book here (it’s free).

The background is this. Like other cities, Manchester had been caught on the backfoot, by the wave of “eco-concern” in 1988 and 89. It had signed up to Friends of the Earth’s “Environment Charter” and not done very much. And it wasn’t until UK Prime Minister John Major declared that Britain would host the follow up to the Rio Earth Summit, and Manchester bid to do so that things moved into higher gear. The Global Forum was supposed to be a large all singing all dancing international event while the world waited for the Rio Earth Summit, to be ratified by enough nations to pass into law. In the end, Rio was ratified more quickly than people have anticipated. And the budget for Global Forum got hacked, leaving Manchester with egg on its face. This was apparent already by the time of the “Partnerships for Change” events in September 93, but in February 94 they were still putting a brave face on things, Manchester said that it was all going to be okay. And as we’ll find out in June, it wasn’t.

Because you have to understand that cities take on these agendas for other reasons in order to try and reinvent themselves in Manchester’s case, and along with the Olympic bid, (which ultimately morphed into the Commonwealth Games). Manchester leaders have always used environment as part of its marketing strategy, rather than its actual industrial strategy or decision making process.

Manchester Council continued making absurd promises, which it did not keep.

I made some Energy Efficiency Rating stickers for digital advertising spaces to let the public know just how much electricity these things burn through per year.

You can get four stickers for £1 from my shop:
http://www.spellingmistakescostlives.com/product-page/energy-efficiency-rating-sticker-for-digital-ad-spaces (For legal/research purposes only obvs)

In Manchester City Council, Labour councillors have all the top jobs and power.

They commission a review to the allowances system.

It results in massive cuts for guess who? The opposition.

Our friends over at @StitchedUpUK in Stretford feature in this article about the importance of #repaircafes, with our very own Matthew in the main image! If you're good at fixing things and can spare a couple of hours a month, we'd love to hear from you! https://www.bbc.co.uk/news/uk-england-manchester-61392928

Take a look at our newsletter to see how YOU can help us raise funds for our legal and expert advice.
Join our 200 Club, use Easyfundraising before your online purchases, participate in our photo competition.
THE FUTURE OF CARRINGTON MOSS IS IN YOUR HANDS
https://mailchi.mp/1b8633cf9800/may-22-newsletter

Cutting pay for opposition work at Manchester City Council on the first big meeting after an election.

That's the way to kick off a new municipal year!!