It is 13 months to the day since we experienced the worst of Storm Christoph where the River Mersey was perilously close to overwhelming flood defences and residents of Didsbury and Northenden were ordered to evacuate their homes in the middle of the night during a pandemic. We noticed that climate change was conspicuously absent from stories in the immediate aftermath, but was eventually picked up and discussed a little at Council Scrutiny. Now as the wind still howls from the tail end of Storm Franklin we feel a sense of deja-vu.

We reported on it here and shared the well-evidenced links between climate change due to more intense and more frequent heavy rainfall events and a complex mix of natural and human factors (how we’ve shaped the rivers and landscape) that creates risks from flooding. There are now increasingly frequent studies that look to attribute extreme weather events to human-caused climate change. One showed that Storm Desmond in 2015 was made 59% more likely. 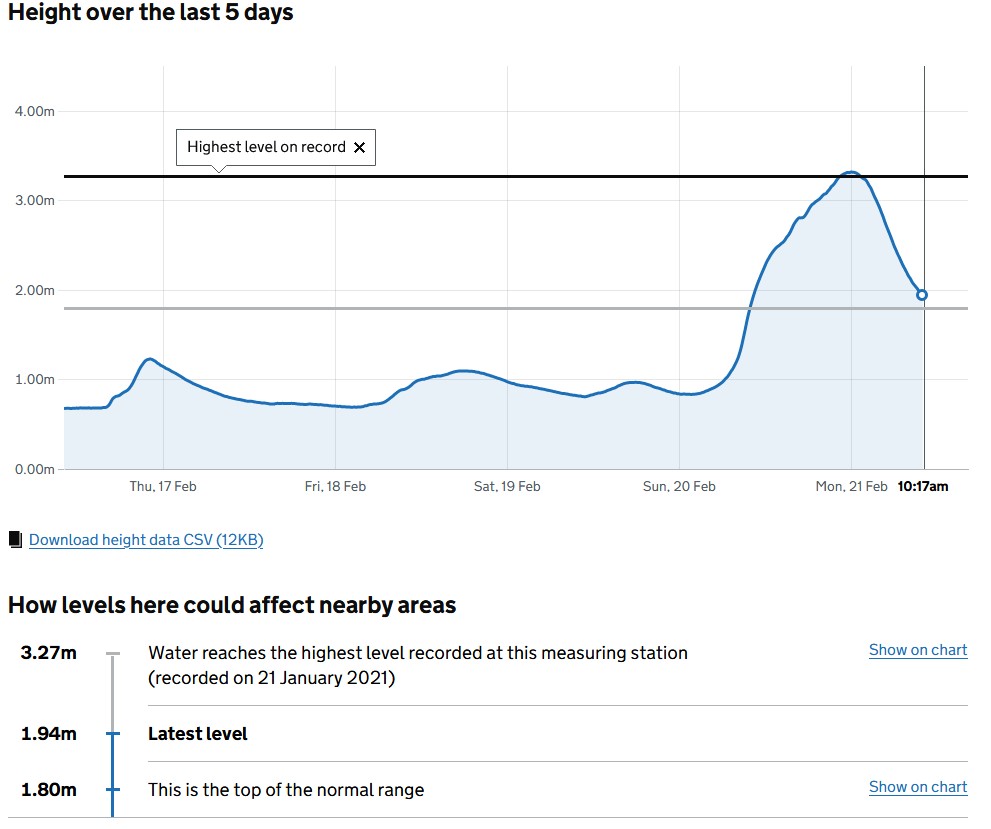 13 months on, the River Mersey has again recorded its highest level at Northenden surpassing the record set during Storm Christoph. It seems only a matter of time until the flood defences fail if this becomes an annual occurrence.

Storms Christoph and Franklin may not have overwhelmed the physical infrastructure and there will be praise deservedly handed out to emergency responders, but how has this impacted and continues to impact those who live at risk from flooding? How does the woeful response to the climate emergency impact them?

CEM recently launched a report looking at the impacts of climate change and health, which touched on the mental health impacts from extreme weather. Whilst the worst may not have occurred this time leading to a long battle to get their homes dry and fixed, how are residents going to feel about repeated evacuation orders?

This CEM core member has a friend involved at Didsbury TOC H RFC, which is one of the areas frequently allowed to flood. How have they been impacted by this continued threat?

13 months on, the city has now gone through around 40 percent of the carbon dioxide budget for the rest of the 21st century to keep climate change to less harmful levels (known as an average 1.5C of warming). These risks are not going away and we will need to adapt to manage these risks and impacts better than we have. Manchester City Council have now got a dedicated Environment and Climate Change Scrutiny Committee, but the action and leadership required to start making a dent and cutting carbon emissions is still far short of what is required.

What we have seen in the past 13 months are the merest glimmers that the council might be starting understand how significant a task it has on its hands. There is still far too much gaslighting, distraction to showcase ‘good news’ on the little things that the council have changed and ignorance about the city’s ever-decreasing carbon budget.

If you have the time, energy or skills (or any combo of those) to get involved in pushing Manchester City Council to be braver and take more bold and ambitious action (or less useless), get in touch via Twitter @ClimateEmergMcr or email us via contact@climateemergencymanchester.net