After a week in which in we have seen developers again hold sway in Manchester, we are bringing together campaigners and historians to reflect on what we can learn from past attempts to save green space in Manchester. Sign up via Eventbrite here! 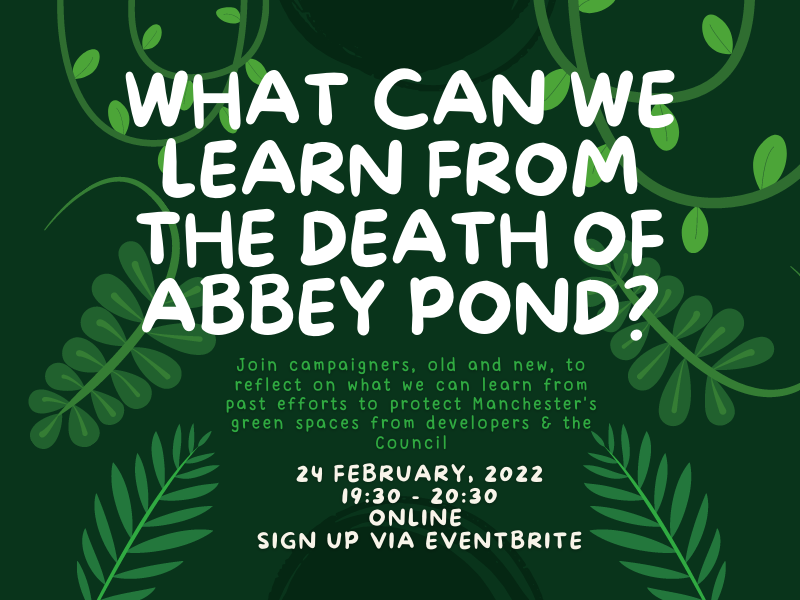 The focus will be on Abbey Pond in 1994. This site of nature lay within spitting-distance of the city centre and lost out to shiny visions (Manchester Science Park) at a time when the Council was making bold environmental promises and positioning itself on the green world stage (Manchester was due to host an international summit called the Global Forum that year). Sound familiar?

Thursday’s one-hour online event marks the anniversary of the Pond’s destruction. We’ll hear from individuals involved in the struggle to save the pond, and see photographs and materials from their campaign for the first time. But this is about more than preserving a key climate history, making sure that an episode in Manchester’s transformation from post-industrial to neo-liberal metropolis is not forgotten. We’ll also be thinking through what those involved in campaigns to protect green space or appeal planning decisions can learn now. Every campaign has its unique features, yet there are broader lessons that we can take on board, knowledge about the planning system and how power works. These cannot guarantee victory (what can?) but knowing what has come before must surely stand us in better stead next time a biodiverse spot is threatened with development or you see an application for a new set of shiny towers pop up. Because it will.

Come along and spread the word! All welcome!