Ahead of our online event TONIGHT on what we can learn from past campaigns to protect green space from development – and the destruction of Abbey Pond – we spotlight planning. The past week has seen a trilogy of storms and planning approval for four new skyscrapers on Trinity Islands. Has anyone joined the dots?

This week’s triple-whammy of storms rightly focused attention on the risks surrounding river flooding – the rising levels of the Mersey and emergency updates for alarmed residents Didsbury and Northenden. But one overlooked aspect of floods, storms and more frequent and intense rains is surface water run-off. Sure, it doesn’t sound sexy, or dangerous. Yet many of us in Manchester will have seen the streets and drains overflow with water. The Environment Agency estimated that 3 million homes are at risk from surface-water flooding, even more than those at risk from rivers and seas. “It hits not just individual homes and businesses, but the whole infrastructure – road, rail, utilities etc – of a town or city, disrupting pretty much all aspects of modern life”. 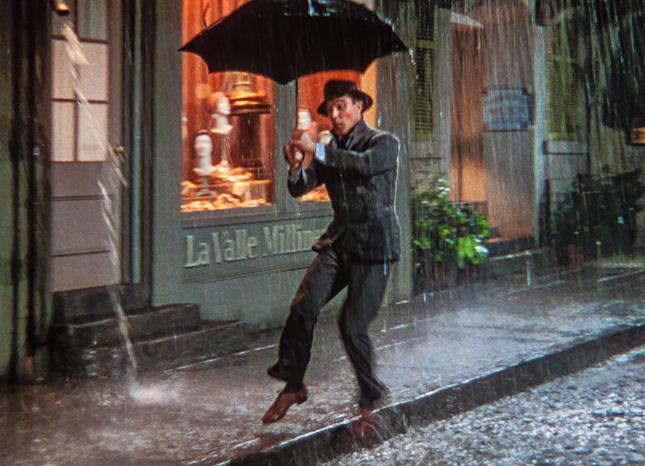 So, don’t be fooled by Gene Kelly’s cheer at surface water flooding in Singin’ in the Rain. This is serious.

When Manchester City Council discussed approaches to flood prevention and management at the Environment and Climate Change Scrutiny Committee in November 2021, there was little mention of surface water flooding in the accompanying reports. Environment Agency representatives acknowledged in the meeting that “we cannot build our way out of flooding” – but while advocating for natural flood defences rather than linking to development in our city centres and the impact that more concrete and glass may have on the lives and safety of residents there.

On Thursday 17 February, with predictions of storm Eunice looming, Manchester City Council green-lit another set of skyscrapers. Four, in fact, on Trinity Islands. The headlines have been announced elsewhere but we wanted to focus on the nuts and bolts of the planning committee, with a view to opening it up to others concerned (see also Steady State Manchester’s excellent Carbon and Planning Workbook). The author is a first time observer of the Planning Committee. We all have to start somewhere. What follows below is a longish read – but worth it for those who want an insight into this processes and where campaigns might be able to intervene in an age of extreme weather events.

The meeting of the Planning and Highways Committee on Thursday 17th February 2022 saw the council approve a planning application to develop 4 skyscrapers on Trinity Islands. The planning application described the site as “two parcels of land…bounded by the River Irwell, Regent Road, Water Street and the Railway” and also as “a contaminated, brownfield site laid as a car park” that “makes little contribution to the local area.”

Google maps can help you judge for yourself:

Overview – what happens at a Planning Committee meeting?

The format of the Planning and Highways Committee meetings, as described by the chair Basil Curley (Charlestown), is that a planning officer will present the case, an objector, if there is one, is then given a chance to speak. Thereafter the floor is offered to the applicant, followed by councillors.

Mr Britten then spoke on behalf of the applicant, Renaker Build, which, he said, “has a  track record of delivering transformational, regenerational projects in Manchester”. Renaker is behind many of the new upmarket, luxury housing developments in the city. Think massive tower blocks. Think glass. Think style?

Renaker’s vision, Mr Britten said, would result in “high quality new homes that will underpin the growth of a new sustainable and well connected residential community within the city centre”. Other benefits highlighted were the jobs created during construction, the financial contribution to the build of a city centre primary school and the addition to the “public realm” (62% of the site will consist of a landscaped area that would contain a “variety of native species and 149 additional trees which would serve to enhance biodiversity.”)

This all sounds rosy, but what about the challenges? The site is contaminated, how will that be solved? There is a flood risk from the river Irwell, how is that being managed?

How is the construction of this building going to contribute to carbon emissions? Globally 12% of building emissions come from the embodied carbon created by the material and the construction process. There are strategies that exist to make building work less carbon intensive – have these been considered? If so, how will these strategies be deployed and evaluated?

This will be a 9 year long project. I wonder how climate change will have impacted our city by 2031: will the River Irwell flood regularly? Will the likes of Storm Eunice be the norm? What will we need our buildings to be like in a 2031 world?

Will these tall towers be able to handle the storms, flooding and weather extremes of the future? Will the glass be energy efficient and durable? How will the operation of this building contribute to carbon emissions? Are the buildings set up to use renewable energy or will future residents be experiencing the same energy woes we currently have?

Would this development contribute to climate change? Is it a step in the right direction?

With such a sweet vision laid out by Renaker, at this stage, the audience is looking forward to some questions and rebuttal. Unfortunately there was no specific objector for this proposal.

Councillors Suzanne Richards (Longsight) and Councillor Joan Davies (Deansgate) both raised important concerns about the lack of affordable housing. As with Renaker’s Great Jackson Street development, their 100 Greengate project, their Wilburn Basin work, the new Trinity Islands project has no affordable housing. Given our current housing crisis, and Manchester City Council’s commitment to remedy this, it’s difficult to see how this is acceptable. Renaker is making a £106,000 contribution to affordable housing and there is a claw-back clause in place too so that if the site is profitable (how profitable?), the council could benefit from more contributions (how much?). As other media points out, this £106,000 seems paltry given their £89.3 million projected profit and the excuse that a 12% return on investment is too low because it is below the industry standard of 18-20% is difficult to sympathise with.

Allowing developers to dodge affordable housing requirements seems to be a habit of the council. How and why this is happening is unclear. A more thorough analysis of Manchester City Council’s housing strategy is needed.

Setting to one side the very real issue that this development contains no affordable housing, what about the other potential challenges?

The only other real challenge came from Councillor Lovecy (Rusholme) who questioned the design of the waste management system. The development boasted that the “waste management would prioritise recycling” but expects the residents of the 39-60 storey buildings to bring food waste to the ground floor. Dave Roscoe addressed the concern as follows: “our environmental health colleagues have been consulted on this and they are very satisfied with the arrangements that are in place.”

Perhaps some would consider Councillor Lovecy’s question too nit-picky or small fry – a detail for another forum. But Dave Roscoe’s response of the “experts said it was ok” was not a very satisfying answer. Why is it ok? It left me wondering whether the councillors were really getting the information, resources and support they needed to properly scrutinise proposals and effectively make decisions.

The only resource councillors had to evaluate the Trinity Islands project was the planning proposal and the information they could glean from the other people in the meeting chamber. It was not clear whether Councillor Lovecy was satisfied with Dave Roscoe’s response but it is interesting to note that she abstained in the vote later.

The 181 page proposal to aid councillors decision making is difficult to digest quickly and just vague in places. For example, in the executive summary, it says the development will be a “low carbon development” but fails to provide a definition or any mention of how this is going to be measured. In one of the only other references to “low carbon development”, there is mention of using “energy efficient fabric”. Again no definition is given for this. Perhaps these terms are jargon or well understood by the councillors but what if this is not the case? What if the reason that more questions weren’t being asked about the Trinity Islands development during the meeting is because the proposal was written and structured in a way that made it impossible to really derive any valuable understanding from it?

There were no other matters raised and the planning application was approved.

The grassy space added by the development to the “public realm” appealed to many of the councillors. In general the body made no other comments or criticism about the environmental impact of the site. The environment and climate change seem very far from this body’s radar.

What is Manchester’s vision for the future urban landscape?

What is Manchester city council’s vision for the future of its urban landscape?

What does a good big residential project look like?

How are we, as a city, preparing for climate change?

You would not understand any of this from attending this meeting.

Although not discussed or alluded to at all in the meeting, there are a number of development policies Manchester has in place, notably the “Manchester Core Strategy Development Plan Document (July 2012)”. Why weren’t these each discussed and checked off in the council meeting?

Perhaps this is because this task has been deemed done. In the planning application, the writer (Renaker?) has referenced Manchester’s Core Strategy Development Plan and made a note of how the Trinity Islands project meets each criteria. Here is an example:

“Policy EN6 ‘Target framework for CO 2 reductions from low or zero carbon energy supplies’ – The buildings functions would seek to reduce overall energy demands. The building fabric would be high quality and energy costs should remain low. On site renewable energy would be provided.”

The same criticism of vague language could be used here. What renewable energy? It is only later on in the report that they make mention of using “air source heat pumps”.

While there may be some benefit to a little pre-reading, the current format of these sessions does not facilitate real debate,  discussion or shared understanding of the material and matter at hand.

I thought these meetings would be a place to gain clarity on a proposal, to understand its pros and cons. The feeling I had about this meeting was that the decision was already made, the time for discussion was over and what I was witnessing was a play of a democratic process. If this is the only forum for democratic representatives to ensure that planning applications fit with policies then this is worrying.

Perhaps the Trinity Islands project is going to be great from an environmental perspective. The meeting didn’t leave me any clearer. Though the planning application goes some way to resolving questions, it’s not convincing and lacks details, particularly around measuring how successfully they have followed these policies.