Climate Emergency Manchester is STILL collecting signatures for our petition (here’s why).  So please, sign online here or download a petition sheet, print it off, sign it and get others to sign it. Then take completed sheet to Patagonia shop in Manchester City Centre or the Sandbar

Meanwhile this page is going to be an (updated!) repository of photos, videos, tweets and transcripts of the climate emergency motion debate. Thanks to Cllr Eve Holt for uploading two videos (already – others to follow) and thanks to various councillors for sharing transcripts!

If you have photos/transcripts etc that you want to see here, please email climateemergencymanchester@gmail.com

Before the debate, concerned citizens gathered outside the Town Hall (photos

And waited for the event to kick off 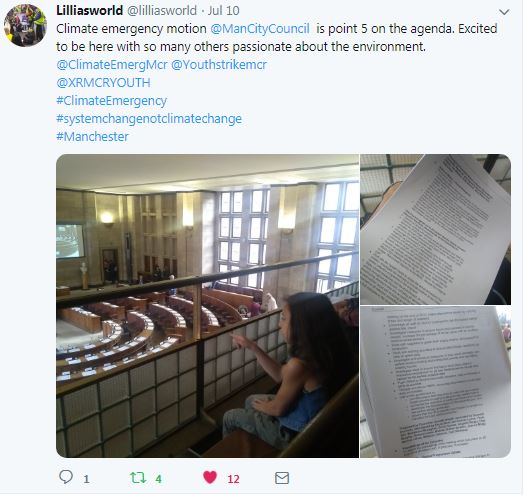 The debate started with this speech from Councillor Annette Wright (Hulme, Labour: @annettewright)

The transcript is here.

Councillor Wright: 'Rampant capitalism is destroying our planet… we must deal with it as we would with any emergency… Invitation not just to a motion but a plan – a plan that involves everyone, and a plan that involves a green new deal' #climatedeedsnotwords @ClimateEmergMcr

And here’s some video footage taken by Councillor Suzanne Richards (@CllrSuzanne) of the councillors and the gallery.

Young people getting their voice heard on climate change in the Council chamber today. They are an example to us all. We are listening and we will work with you! Action now. pic.twitter.com/HICrZr00xz

The transcript is here.

Now we go into speakers – most of whom presumably will be speaking in favour – First up @JonConnorLyons thanking @AnnetteWright and @evefrancisholt God, born 1996. How dd I get so old???#climatedeedsnotwords
Shouts out to litterpick-ing Youth Strikers last month…

The Lib Dems proposed an amendment

-Explore the possibility of introducing a 2030 target in line with the IPCC report and request that a report on its viability be brought back to the Executive before the end of the year.

which was… accepted and applauded… (this, to be fair, is a little unusual)

Now @RKilpatrickMCR of Lib Dems thanking @AnnetteWright for including the amendment into the @climate emergency motion.
Talking about the @IPCC_CH 1.5 degree report of last year (the 12 years one).

You can read the transcript of her speech here.

Next up Cllr Marcus Johns (Labour, Deansgate @CllrMarcus) talking about the importance of the Green Economy. And divestment.

Nice call for money from @MShiltonGodwin Now up @CllrMarcus talking about the costs of cliate degradation. Need to change relationship to planet. Sounding v. XR at minute!! 1000s of green jobs for those frozen out at present…#climatedeedsnotwords

You can read his transcript here.

The  final speaker in the debate was  Angeliki Stogia, Executive Member for the Environment  (Labour, Whalley Range  @AngelikiStg)

While it’s great to have an Exec Member speaking to the motion, it’s also worth noting that Councillor Stogia had as of March 2019 not given a single speech on climate change in the previous two years,  has flown to Brussels and back earlier this year, and late last year unilaterally cancelled the quarterly carbon reports which the Neighbourhoods and Environment Scrutiny Committee had been getting since 2016.

Anyway, how did it all end?

Now @AnnetteWright forgoing her right of reply. Going to a vote…

Wild applause (not on livestream though!)#climatedeedsnotwords

And then there’s this video of that applause, and astute comments from Claire Stocks.

And what next? What do we do After the Declaration. Here is the beginning of Climate Emergency Manchester’s answer…  As the hashtag goes #climatedeedsnotwords