Skip to content
8 June, 2020 Marc Hudson 1 Comment
If we want to be allies – or rather, “do allyship” – in meaningful ways, then we are going to have to help each other (it’s not the responsibility of those we seek to ally with to do that emotional and intellectual labour: they have quite enough on their plates as it is).
allyship novice 2 pager 2020 06 08 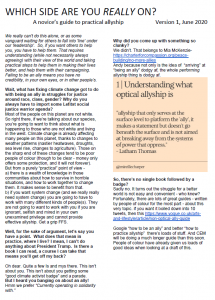 To that end, Climate Emergency Manchester today publishes a “novice’s guide to allyship” you can download it here as a word document or as a pdf.  We hope you find it useful.  We also hope you’ll tell us what you disagree with, what you think should go in a longer version (because there will be a longer version). (The term novice is part of our Active Citizenship Toolkit, where elements can be broken down into four skill levels – novice, practitioner, expert and ninja).
We are going to start doing regular posts where we try to give signal boosts to those working on social justice issues,and also explore some of the history of how we got to where we are, using the lenses of racism, sexism, species-ism “etc”.
For now, we’d like to add some comments from someone who kindly looked over our novice’s guide. These comments (and others) will make their way into the “practitioner’s guide”
Being an ally also means making the conscious effort to support local communities and businesses run by  (People of Colour (PoC), as well as organizations that work with PoC. There has been an outpouring of donations in support of the BLM movement in the last two weeks, but being an ally means to incorporate regular donations on a long-term basis. Support for businesses and organizations run by PoC should not end with the protests.
You could also build on the last point – “Plan to do this for the long haul.” It’s also worth mentioning that in order to translate intentions into sustainable actions, it is necessary for individuals to create specific, actionable goals. For instance, it could be creating a comprehensive reading list of British colonial history, or it could be a list of documentaries to watch & discuss with friends. It’s not enough to proclaim that you are “anti-racist” on social media. Create concrete goals to translate your intentions into actions. Write down long-term commitments and hold yourself accountable to them.
It’s (relatively) easier to talk about racism with friends and peers who share similar opinions, but to be an ally means to step out of this echo chamber and grapple with racism which is rampant in families and communities. It is a tiring process to raise these conversations at home, but allies have the responsibility to take an active approach to initiate difficult conversations surrounding racial and climate justice, in both public and private spaces.
Create time for self-reflection every single day. This involves confronting and reflecting on the ways in which we have supported racist, sexist, and capitalist power structures. We have been raised in neoliberal, patriarchal, racist societies, and challenging these dominant ideological structures must commence with a critical analysis of the fundamental beliefs and assumptions which have been deeply ingrained in us. Always, always question your beliefs and assumptions.
I also looked at the reading list in the guide and it provides an excellent starting point for curious readers. However, I think it would also be helpful if you could include some articles on environmental racism. From the conversations I’ve had with friends, I find it extremely disappointing that many are unaware of the links between racism, colonialism and the climate crisis. You’ve briefly outlined this at the beginning of the text, but I think you could add more sources about it in the reading list. I found a list compiled by the New York Times last week which might be helpful – https://www.nytimes.com/interactive/2020/06/05/climate/racism-climate-change-reading-list.html?smid=tw-nytclimate&smtyp=cur
And here’s another good article I read some months ago: https://www.globaljustice.org.uk/blog/2019/oct/7/colonialism-capitalism-climate-crisis
Lastly, I’m not sure if this would be relevant in this article, but I think its important to highlight the need to endorse decolonial and feminist approaches to tackling the climate crisis. Maybe this could be covered in another article though – since there is plenty to be written about the climate justice movement.