If Manchester City Council had been the owner-operators of the Titanic, then before the ship had hit the Atlantic sea-bed they would have put out a press release mentioning all the nice things the survivors would  be able to do in New York.

That is just how they roll. They never admit a mistake, they always try to distract by making irrelevant asides (1). They think it’s Clever Public Relations, but it is actually just humiliating (to them) and embarrassing and destructive of the trust we will need to cope with the climate emergency.

You can see it clearly in the response the Council is sending out to Members of Parliament who have enquired – on behalf of constituents – about the lack of pop-up bike lanes (and yes, CEM encouraged folks to write to their MPs).

Lucy Powell, MP for Manchester Central has received this, and forwarded it to a constituent. The text  of the Council’s “reply” (it isn’t an answer) is in the left hand column. In the right, we’ve translated it.  It can also be downloaded as a word document here. 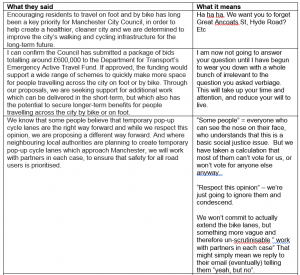 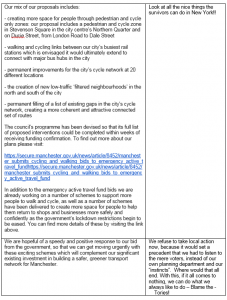 So, if the council is allowed to get away with this, then, and with no apology for shouting, MORE PEOPLE WILL DIE.  And those will mostly be POOR AND VULNERABLE PEOPLE.  That’s because they will get into their cars (air quality issues for everyone else) or if they don’t get into their cars – MOST PEOPLE IN MANCHESTER DO NOT HAVE CARS – they will have to take their chances on public transport, during the seemingly-certain-to-arrive second wave.

And it will also destroy any vestiges of hope that people have that Manchester City Council can ever be budged from its idiotic and contemptuous-of-the-public stances. This will make campaigning and movement-building around the climate emergency even more difficult. Why would people get involved if the ‘movement’ cannot even win something as totally obvious as pop-up bike lanes?

So, “we” need to write to our councillors about this.

We need to find out what exactly the City Council IS doing when approached by other councils about specific bike lanes. Is it fobbing them off, is it lying to them, is it doing its usual bureaucratic go-slows and tricks? We need to do this on a case-by-case basis.

We could ask the relevant “leaders” to create a page on the MCC website which showed
a) which LAs had been in touch about which bike lanes and when
b) what specific replies and commitments MCC had given.
Somebody (not CEM) could set up a googledoc that captured the data – 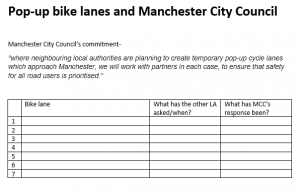 Another way forward is to get the scrutiny committees to have a look at this.  We as CEM are holding a meeting on Monday 22nd June, at 7pm which will explain how scrutiny works and what is (and is NOT) on the agenda of next week’s meetings.

Please please please get involved in a group campaigning on transport issues in Manchester (and to be clear, CEM is not a key player, nor does it want to be). Please get the groups to raise their games, to raise the pressure on the council.

If we cannot get pop-up bike lanes, for basic social justice, then what – finally – is the point of all our “activity”?

(1) In World War Two planes would send out aluminium/paper etc, to try to confuse enemy radar – this was known as ‘window‘ or chaff.. Well, this is exactly what the Council is doing, always does.

1 thought on “Manchester City Council, pop-up bike lanes, the Titanic and What Is To Be Done?”