On Monday 22nd June, at 7pm, Climate Emergency Manchester holds its next online meeting [email us on contact@climateemergencymanchester.net if you want to attend]. High on the agenda (which will be published on Saturday) is the possible creation of a Climate Emergency hub.  What’s that? Read this interview with the local artist doing the work to make it a reality, Jackie Haynes….

Who are you, what sort of artwork have you done?

I’m Jackie Haynes, a Manchester resident since 1986. I ran House of Haynes Fancy Dress Hire, designing and making costumes in the city centre for 14 years before returning to education to do MA Textiles at MMU. I’m now an artist and am currently writing up an art practise-based PhD study of the German artist, Kurt Schwitters, at University of Cumbria. I make things, mostly from leftovers and use them in performance, installations, videos and photographs.

When did you start being concerned about climate change?

After a meeting at the Mechanic’s Institute in Manchester in the mid 90’s, listening to Arthur Scargill warning about the removal of Clause IV from the Labour Party which resulted in New Labour, I became interested the Green Party, mainly on the grounds that we all have to breath the same air, and they seemed to be the only party talking about this at the time. More recently, I’ve been going to more and more demos and marches with my children. They aren’t old enough to vote yet, but need to learn how to present themselves as part of the generation which will be left to deal with the backlog of climate injustice whist living with the consequences of it. A highlight was when they went back into class after a Friday School Strike 4 Climate and their teacher encouraged them to stand at the door and hand out Climate Breakdown stickers they’d brought back for their classmates. For some it seemed like this was the first time they’d heard about it.

What is the idea for the community climate emergency hub?

Platt Hall (a branch of Manchester Art Gallery) is currently re-inventing itself through public consultation as a community-focused museum and creative making space. It is well placed – in a beautiful and well-used park at the junction of Rusholme, Fallowfield and Moss Side – to become an accessible and reliably open public building to be used as a dedicated resource in which to self-organise and incubate, discuss and action ideas in response to the climate emergency, according to the interests of local residents.

a) why is it needed?

This would hopefully become one of a growing number of facilities spread across Manchester, which could then start talking to each other to mobilise the joined-up thinking needed to make sure all voices, ideas and perspectives on the climate emergency are included.

The idea originated from dismay that my democratically elected Green MEP had to walk away mid-conversation from European colleagues. This made me realise how important it is to have a regular and inclusive place to congregate to discuss climate emergency with urgency and the ability to act collectively.

b) where are your plans up to?

As Terrace Square Artists Project (TSAP) – a growing network of creative neighbours in the Fallowfield and Moss Side wards whose houses back onto an alley – we took part in Platt Hall’s Open Door programme of local consultation and suggested this idea.

It is currently gaining traction and was cited in MCC’s Communities and Equalities Scrutiny Committee report which includes Platt Hall: ‘A place for collective engagement with social issues, especially the climate emergency. A very strong theme throughout discussions, which included a suggestion from the Terrace Square Artists Project group of making Platt a hub for neighbourhood action in response to the climate emergency.’

What are the next stages?

The new works for Platt Hall, including the Story-telling Project will be part of Love Parks Week in Platt Fields from July 10th 2020, which is coincidentally the anniversary of Manchester Climate Emergency Declaration. Stories from local residents are being collected which tell fantastically tall tales of climate emergency activism and wishful thinking. The stories will be told via a new version based on the Noah’s Ark set of toy animals from Platt Hall’s Mary Greg Collection (see photo). 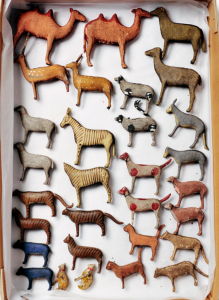 Stories can be submitted in any form and in any language and will be worked into a filmed installation called NO! AH! (dismay followed by ideas) which will be available online.

The next major stage will be when lockdown restrictions are lifted and the consultation and development of the hub can pick up pace in person in the Hall.

What needs to happen to turn it into a reality?

Platt Hall is currently closed to the public as work goes on to raise funds for its redevelopment. The climate emergency hub idea contributes towards making the case for Platt Hall’s bid for the next round of funding.

Please send in any fantastically tall tales of climate emergency activism and wishful thinking, by the end of June!

Green space, green belt, green field, brown field, carbon impacts, housing needs. Places for Everyone will have major impacts and it's tricky to report on. Good to see this piece in @ManchesterMill. Some comments. 🧵
https://manchestermill.co.uk/p/a-heated-battle-over-the-green-belt

Stoked to have written this piece on Places For Everyone and Green Belt for @ManchesterMill — what's actually at stake with the release of GM Green Belt?
https://manchestermill.co.uk/p/a-heated-battle-over-the-green-belt

For those who think we’re a rational species who will have a calm and gentle low carbon transition… welcome to the anthropocene https://www.manchestereveningnews.co.uk/news/greater-manchester-news/its-been-manic-queues-petrol-21665132

Will we get a change in tone with a new leader? If so, it won't be because of the new leader, but the pressure that citizens exert on him or her. It's that simple. https://twitter.com/ClimateEmergMcr/status/1441377244555874305

Manchester Council Executive proves unwilling to confront the fact that the city has burned through 40% of its science-based carbon budget for rest of the century in just 3 years.
#ClimateStrike https://twitter.com/ClimateEmergMcr/status/1441372122199244800

Manchester Council Executive proves unwilling to confront the fact that the city has burned through 40% of its science-based carbon budget for rest of the century in just 3 years.
#ClimateStrike

38 days before the council 'partnership' @McrClimate goes to Glasgow #COP26, with a new director of the 'agency', but no moral authority http://climateemergencymanchester.net/2021/09/24/38-days-before-the-council-partnership-mcrclimate-goes-to-glasgow-cop26-with-a-new-director-of-the-agency-but-no-moral-authority/