From 7pm on Monday 22nd June, Climate Emergency Manchester will be holding an online meeting for people who

It follows on from this small but perfectly formed meeting last month.

We chose the 22nd because as of Tuesday 23rd June the six scrutiny committees of Manchester City Council are meeting (online) for the first time since the lockdown (scheduled meetings in May were cancelled).

We will be using a different platform than Zoom (security issues) – namely Cisco’s Webex. You can attend this meeting without downloading any software to your computer. Email us for the password – contact@climateemergencymanchester.net 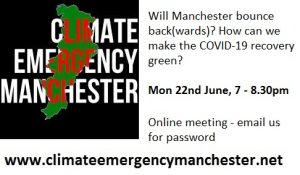 We would love help in putting this meeting together. If any of the jobs below appeal to you, please get in touch (the language of novice/practitioner is drawn from our Active Citizenship Toolkit)

Graphic design (practitioner level) – Are your graphic design skills a bit beyond “Paint”? We need you to create, as soon as possible, a compelling and friendly image for Climate Emergency Manchester’s June 22nd online meeting.  And no money, but, you know “exposure” and our undying gratitude.

Writing press releases – novice level fine (you can work from our template). To be ready no later than 17th June, for release on morning of 18th.

Researchers – practitioners sought to do close reading of Council documents, tease out what they say (the important information is often buried in a footnote on page 17) and, ideally, what the documents DON’T say.  Needs to be available between 16th an 19th June, when the papers for the scrutiny committees will be released

Report-writing – practitioners needed to help in the creation of a single report which covers the six scrutiny committees and what else the Council is and isn’t doing. Needs to be available to do work between 15th and 20th June

Proof-reader and copy-editing – practitioner sought for work on 20th/21st June, to check over report(s).

Btw  as per this –  “Shortly after 12.30pm on 22 June 2010, George Osborne stepped up to the dispatch box as chancellor of the new coalition government and announced the longest and deepest period of cuts to public service spending since the second world war.”