We at CEM have cultural capital oozing out of our ears (i.e. we’re massively over-educated). So, one thing we’re going to do is find useful academic work about climate change, social movements etc and translate it into English. We call this “Looting the Ivory Tower”.  If we our explanations are still no good, if you have a paper you’d like looted, if you want to do some looting yourself – please let us know – contact@climateemergencymanchester.net 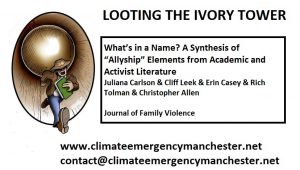 The title: What’s in a Name? A Synthesis of “Allyship” Elements from Academic and Activist Literature

The journal: Journal of Family Violence

Within men’s activism to address gender inequities and prevent gender-based violence, and social justice movements more broadly, questions about the usefulness and limitations of the term ‘allyship’ have surfaced. Moreover, studies demonstrate that social justice activists with privilege often perpetuate inequalities, perhaps despite their best intentions. To explicate the current understanding of allyship and to apply it to male activism, this paper synthesized the primary elements of allyship as defined by 40 activist and academic sources. Eight unique and discrete themes surfaced: constant action of the “everyday ally”; prioritizing a structural analysis of oppression and privilege; non-self absorbed and accountable self-reflection; amplify marginalized voices; welcome criticism and be accountable; listen+shut up+read, ally is not a self-adhesive label; and allyship: unlikely or undesirable?. While surfacing as discrete concepts, the themes inter-relatedness and interdependence appeared equally crucial. The implications of this synthesis for allyship discourse and scholarship are offered. This synthesis provides conceptual and practical insights that can be applied to men’s gender equity promotion and gender-based violence prevention work. 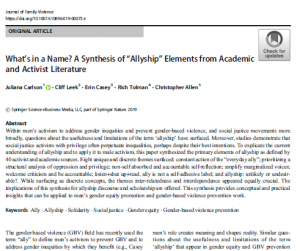 Academics interested in ‘what does it mean to be an ally?’ do a thorough search, not just of academic literature but ALSO of what activists write. They then break it down into 8 lessons, the first seven of which are largely agreed on.

And the final one –

In this one the authors write about a bunch of (extremely valid!) concerns they found among academics and activists. The final bit of that section –

“Finally, other authors questioned the fundamental legitimacy of the concept of allyship. For example, Petersen-Smith and Bean (2015) note that “allyship” is but one of many potential tools for dismantling social injustice, and an undue or disproportionate focus on this strategy risks centering both the concerns of dominant groups, and an individual-level analysis of the dynamics of oppression. More fundamentally, noting the totality with which male privilege imbues social structures and every single social interaction, Kahane argues “Privilege can be given up in particular contexts…But men will be treated as men, in an inexhaustible array of contexts” (p. 223). Finally, blogger and activist Mia McKenzie (2015) goes further, evoking the notion of “ally theater,” and conveying deep skepticism, stating “‘allyship’ has become more pointless performance than anything actually useful to marginalized people.”

This puts me in mind of a passage in Alison Phipps “Me not You: the trouble with mainstream feminism”

“Like political theorist Zilla Eisenstein, I also wonder about the distinction between being an ally and a comrade. But for Eisenstein, allyship means supporting a struggle but not being in or of it, while comradeship implies we are all in this together.  Eisenstein’s definition of allyship reminds me of the performative outrage of whiteness. To become comrades, by her definition, we would need to spend less time in outrage and more time loosening the knots of political whiteness in ourselves and our politics. We would need to let our ideas and actions be led by more marginalised people. We would need to work against how racial capitalism divides and stratifies us for profit.” (Phipps, 2020: 161)

McKenzie,M. (2015). How to tell the difference between real solidarity and ‘ally theatre’. Retrieved from http://www.blackgirldangerous.com/2015/11/ally-theater/

Should you read this?