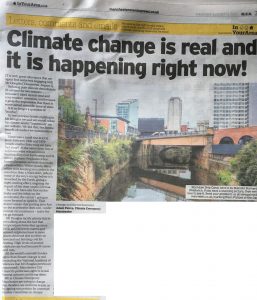 Below is the latest CEM letter, written by Adam Perice. It references our petition for a seventh scrutiny committee – if you live, work or study within Manchester City Council’s boundaries, please sign it and share it.

It is with great reluctance that we again find ourselves engaging with Mr Douglas (Letters, 1 August). Refuting pure climate denialism is ill-advised for two reasons – because it takes up our time and your readers’ attention, and because it gives the impression that there is some actual scientific issue at stake. It is no longer a question of “maybe”.

In two previous letters replying to Mr Douglas we said we would refute his climate denial “arguments” on our website. We did that, but for the benefit of readers we summarise it here. There was a small rise in CO2 levels between 1940 and 1970 (much smaller than what we have had since). At the same time, lots of sulphates were released from burning dirty coal for heating and in power stations. Sulphates when burned become aerosols that make clouds whiter. White clouds, like a white shirt keeping you cooler in the sunshine than a black shirt, reflects some of the Sun’s energy before it is absorbed by the earth, giving a slight cooling effect, negating the impact of the then-small CO2 rise.

So, if you have one foot on the brake and the other on the accelerator, the car isn’t going to move forward as quickly. That doesn’t mean that putting your foot on the accelerator does not – under normal circumstances – make the car go forward. Mr Douglas tacitly admits this by not talking about the fact that temperatures have shot up since 1970, as CO2 levels soared and aerosol sulphates have in most places declined due to clean air laws and not burning coal for heating… High levels of aerosol sulphates are bad because it causes acid rain.

All the world’s scientific bodies agree that climate change is real (including the National Academy of Sciences that Mr Douglas previously mentioned). Manchester City Council’s politicians agree it is real. But real action is not being taken. We at Climate Emergency Manchester are trying to change that. Readers are welcome to join us by signing our petition for a seventh scrutiny committee on climate change and the environment.