Another letter in the Manchester Evening News, this time talking about the excellent investigative work of Sam Tate…The bit about our petition for a seventh scrutiny committee – if you live, work or study within Manchester City Council’s boundaries, please sign it and share it – was cut for space. 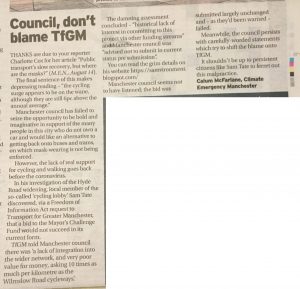 Thanks are due to your reporter Charlotte Cox for her article “Public transport’s slow recovery, but where are the masks?”  (MEN, 14th August).  The final sentence of this makes depressing reading – “the cycling surge appears to be on the wane, although they are still 6pc above the annual average.”

Manchester City Council has failed to seize the opportunity to be bold and imaginative in support of the many people in this city who do not own a car and would like an alternative to getting back onto buses and trams, on which mask-wearing is not being enforced.

However, the lack of real support for cycling and walking goes back before the coronavirus.

In his investigation of the Hyde Road widening, local member of the so-called “cycling lobby”, Sam Tate discovered, via a Freedom of Information Act request to Transport for Greater Manchester, that a bid to the Mayor’s Challenge Fund would not succeed in its current form. TfGM told Manchester Council there was “a lack of integration into the wider network, and very poor value for money, asking ten times as much per kilometre as the Wilmslow Road cycleways.”

The damning assessment included – “historical lack of interest in committing to this project via other funding streams”  and Manchester Council was “”advised not to submit in current status pre submission.” You can read the horrible details on his website, https://samvironment.blogspot.com/

Manchester City Council seems not to have listened; the bid was submitted largely unchanged and – as they’d been warned – failed. Meanwhile, the Council  persists with carefully worded statements which try to shift the blame onto TfGM.

It shouldn’t be up to persistent citizens like Sam Tate to ferret out this malpractice.