The MEN has kindly published our letter about the latest Great Ancoats Street scandal. It includes a plea for people who live, work or study within Manchester City Council’s boundaries to sign the petition for a seventh scrutiny committee, dedicated to climate change. 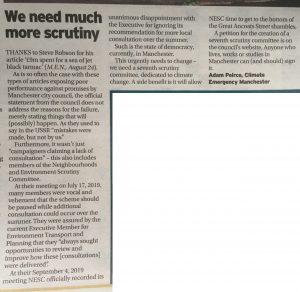 Thanks to Steve Robson for his article ‘£9m spent for a sea of jet black tarmac’ (MEN, 24 August). As is so often the case with these types of articles exposing poor performance against promises by Manchester City Council, the official statement from them does not address the reasons for the failure, merely stating things that will (possibly) happen in the future. As they used to say in the Soviet Union “mistakes were made, but not by us.”

Furthermore, it wasn’t just “campaigners claiming a lack of consultation” – this also includes members of the Neighbourhoods and Environment Scrutiny Committee. At their meeting on 17 July 2019, many members were vocal and vehement that the scheme should be paused whilst additional consultation could occur over the summer.  They were assured by the current Executive Member for Environment Transport and Planning that they “always sought opportunities to review and improve how these [consultations] were delivered” At their 4 September 2019 meeting NESC officially recorded their unanimous disappointment with the Executive for ignoring their recommendation for more local consultation over the summer.

Such is the state of democracy, currently, in Manchester.