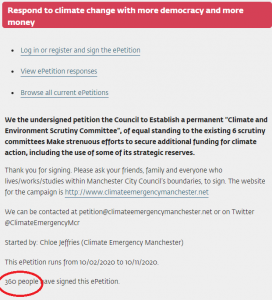 We now have online 360 signatures on the petition for a seventh scrutiny committee, devoted to climate change.  (We also have over 500 on paper).  We need 4000 by November 10th to force a debate in council.  If you live, work or study within Manchester City Council’s boundaries, you can sign it and share it.

When we hit 350 signatures online, we did a post about the summer of 1988, which was when climate change first got properly onto the public agenda, with politicians making promises.  The excuse… sorry, pretext… sorry, reason, was that in that summer, the atmospheric concentration of carbon dioxide hit 350 parts per million. Doesn’t sound like much, but carbon dioxide acts as a blanket, trapping heat that would otherwise bounce back into space. The thicker the blanket of gases like carbon dioxide, the more heat gets trapped, the more ice melts, the more heatwaves etc.

Well, nine years later, with the atmospheric concentrations at 360 parts per million, the world’s nations met in the Japanese city of Kyoto to….

But wait, let’s do a super-quick history lesson filling in the gaps.

In 1991 the negotiations for a climate change treaty finally began. The main sticking point was poor nations said “we didn’t cause the problem, though we are suffering from it: it’s up to rich nations, which DID cause the problem, to cut their emissions first, giving us space to develop.”  The USA said “the American way of life is not up for negotiation.” In 1992, at Rio, a compromise treaty was signed, but only because all mention of targets and timetables for rich countries to reduce their emissions had been taken out (because the Americans threatened, plausibly, that they wouldn’t come if targets or timetables stayed in). The treaty got ratified quicker than expected, and in Berlin, in March/April of 1995 the first “Conference of the Parties” took place. The same dilemma was present – who should cut, by how much, how soon?  Despite the efforts of countries like Australia, there ended up being an agreement (“The Berlin Mandate”) that by the third meeting, there would be an agreement that rich countries would sign, which would force them to cut their emissions.  There was a hell of a lot of fighting and screaming over the next two years

The main point is that the Europeans, who had been very suspicious of market mechanisms like carbon offsetting and carbon trading, folded in order to keep the Americans involved.  However, American fossil fuel interests made sure that Kyoto would be a dead duck, by getting senators to vote against any deal before it was even tabled (international treaties have to be ratified by the US senate).

So Kyoto was a classic fudge – there was a piss-weak deal (and Australia got a huge INCREASE in its emissions as part of its “reduction” goal).  It was just for the rich nations, and it was nowhere near the scale that the scientists were saying was required.

And then?… the Bush administration pulled out in 2001. The Australians followed in 2002. The Kyoto Protocol was finally ratified in 2005, but only because the Russians came onboard, in exchange for World Trade Organisation membership.

The whole thing was a dreadful farce, and was due to be expire by 2012 anyway, so was going to need replacing by 2009.  But if you want to hear the story of Copenhagen, well, we need a bunch more online signatures to get to that. What greater incentive could you possibly have to get out there sharing the petition and urging your friends/family/work colleagues/casual acquaintances to sign it?

360 is also the number of degrees in a circle.  And check out this wonderful  self-explanatory cartoon by Marc Roberts, which you’re going to be seeing a lot more of. 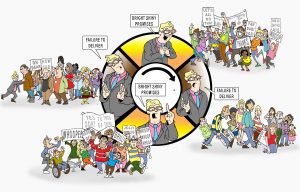 And finally, next Tuesday, 1st September, 8pm, we’re holding our next online meeting. Please email us at contact@climateemergencymanchester.net for the address and password.