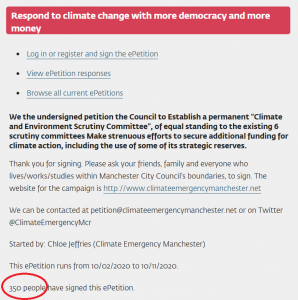 We here at Climate Emergency Manchester are trying to get 4000 signatures on a petition calling for Manchester City Council to set up a Climate Scrutiny Committee.

The argument is as follows:

A new scrutiny committee, dedicated to climate change is simply a logical follow on from declaring an emergency. Unless you thought that the declaring of an emergency was the END of a process – a way of shutting things down, shutting people up – rather than a new direction….

So, we need those 4000 signatures to find out what the councillors actually meant when they voted for a climate emergency, and whether they are willing to submit the Council and its partner organisations to proper regular forensic scrutiny, and to hear new ideas. Or whether they really just want business as usual.

So, 350 signatures.  Firstly thank you to all the people who have signed, who are out there asking others to sign. If we can help in anyway – providing videos, FAQs, etc, please email us on petition@climateemergencymanchester.net

350 is not a particularly memorable number, unless you are a total climate geek  (cough, cough, whistles, looks around nervously).

350 is both the atmospheric concentration of carbon dioxide that climate scientist James Hansen suggested was a “safe” amount.

It’s also the atmospheric concentration we had back in 1988.

What is so special about 1988?  Well, it was a long hot summer, especially in the US. And it was the year that the threat of man-made climate change, which was something scientists had become increasingly concerned about – especially since the mid 1970s –  finally became something that elite politicians had to talk about.  George H.W. Bush talked about it on the campaign trail as he sought to move on up from Vice President to President.  Margaret Thatcher talked about it.  1988 was the beginning of the first big wave of climate-specific global concern, which culminated with the signing of the 1992 “United Nations Framework Convention on Climate Change.”

Since then, we have had 32 years of empty promises and greenwash.  Manchester has done its fair share of that.

Only with regular, frequent, forensic scrutiny have we a snowball’s chance in hell of changing the habits of the last 32 years.

There are LOADS of things you can do to help spread the word.  Below is a list of seven.  More ideas available upon request.

Here are seven crucial ways you can safely help us get the remaining 3141 signature we need.

There is lots else you can do to help. Here’s a longer list of 15….

Is the term “carbon budget” too complex to understand? Let us know.