On Monday 17th we released a report about Manchester City Council’s abject failure to collaborate with other local authorities on active travel provision (e.g. pop-up cycle lanes).  Here below, Chloe Jeffries of the core group quizzes Marc Hudson, who led on the project.  This is part of CEM’s effort to try to do its learning “in public”, and to normalise post-morteming.  See also our interview with Chloe Jeffries about her “Core Cities” report, and with Marion Smith about her video mash-up of the appalling attitude of Manchester City Council to the idea of additional democratic scrutiny.
Answers have been edited for reasons of bile and libel laws… 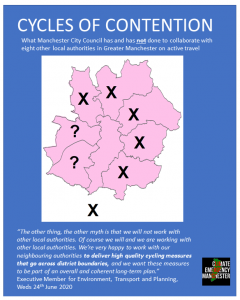 Remind us who you are, and what CEM is – especially in the context of a report on cycling.
I’m Marc Hudson. I am a member of the core group of CEM. CEM is a non-partisan group of citizens with the aim of radically improving the city’s response to the climate emergency – both the Council and the broader civil society. We believe that the days of PR spin and kicking the can down the road are over, and that we need both better policies, but also implementation of existing policies. We’re horrified that the city has burned through a quarter of its carbon budget for the rest of the 21st century in the last two years alone, and that the “leaders” in charge of the City and its climate response are not trying to do anything substantive about that, beyond a few zoom meetings and maybe some solar panels on a cathedral.
The cycling issue for us is kind of like a “brown M&Ms” issue – a relatively small thing in the bigger picture of massive decarbonisation, but if you can’t even show leadership and boldness to get the small things right, why should anyone take you (the Council) seriously on the big stuff?
What was the rationale for ‘Cycles of Contention’? Did you come up with the title and work backwards?!
I represent that accusation!  Sorry, I mean, resent it.  The title is a lift of a famous (well, it’s all relative) social movements studies chapter from a couple of decades ago.  I like puns in titles – in spite of (because of?) the fact that it exasperates my wife. The issue of pop-up cycle lanes, and the total failure of the Council to act sensibly, came first though, promise.
How was the report produced? Did you use a tried and tested process, or were there any innovations?
It was a tried and tested approach, though with a couple of minor innovations (and, truth be told, backward steps).  I devised some basic specific questions to ask the City Council, and found a bunch of people who live in Manchester (not that they would have to to submit a FOIA) who were relatively or completely new at submitting FOIAs.  I think it’s really important to spread that particular skill. I also devised FOIAs for the other local authorities and sent most of them myself (except for Salford).
It was then, when the replies finally came back (though props to Bury – they came back the next day) of collating the replies, chasing up people etc. 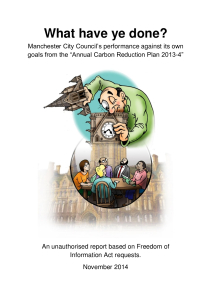