Tell us a bit about yourselves – where you’re from, how you formed. 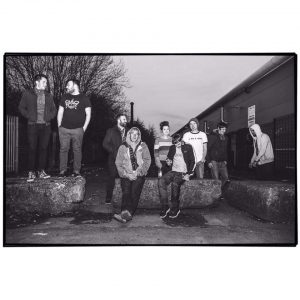 Mancunian 9-piece party band The Moods are borne out of a celebration of their home city’s musical heritage. But it’s not what you think; Whilst the majority of Mancunian bands are jangly, guitar-based indie bands, The Moods definitely are not. Instead they celebrate the city’s rich heritage in dance music. For a city who brought House music to the UK, this is surprisingly something of a rarity.
Inspired by nights out raving to DJs who played old-school House, Drum & Bass, Dubstep and Jungle they noticed a distinct lack of bands who delved into these genres. This led to a collection of unlikely accomplices to join forces. Classically trained musicians, council estate rappers and bedroom producers all aligned to bring these typically DJ dominated genres to the live stage.
Two live drummers, a violinist and a trumpet player join bass and synths to produce an unusual line up of musicians. Throw a poet, a singer and a rapper into the equation and the result is as enthralling as it is unorthodox. The Moods live shows have built something of a reputation for being one of the most energetic on the circuit and once you see them live, you will understand how easy it is to get swept away in the raucous atmosphere that they create.

The number of styles and genres you draw on is striking. Did this come about by accident, or by design?

The genre hopping we do is by design but didn’t come without trial and error.
With the amount of people in the band we all have different music tastes and wanted to use that as a strength also a more up beat tempo to really get the crowd dancing

You have a new single – and it’s a tune! ‘The rise and fall of America’… what’s the story? And why focus on the challenges facing the USA?

We used the USA as a metephor for the whole of civilisation. The hunger for power and resources we see today is nothing new. From the Roman empire to the British empire  the historical records always show an invading power, as bringing civilisation to the barbarian savages that have been conquered.
We always aim to capture the times we are living in and bear witness in the form of protest songs
Today’s lust for oil and the fact that it is all based around the almighty dollar puts the USA at the head of today’s civilisation. This song is not just aimed at Donald Trump But all presidents and governments that put profit before the planet and all its inhabitants

Can music have a powerful message AND be a party anthem? Is there any tension between the two?

Music can be both, 100%. We take the stance that different aspects of a song are listened to depending on the setting. For example if you are having it with your mates and 15 pints, you arent listening to the singers words of wisdom, you’ll be raving to the dirty synth. On the flip side, if you are listening to a song whilst you are cooking then you probably aren’t doing windmills on your kitchen floor whilst you are flipping your pancakes, so the lyrics will be more prominent to you. A song can definitely be both with no issues in our experience

Aside from your own stuff (!) what else are you listening to right now? What should be on our playlists?  And what new music is addressing the climate emergency?

With 9 people in the band we have an eclectic mix of music that we listen to, and that shows in the music we make.
Locally in Manchester check out Fought Process, and another great lyricist and rapper is Reminiss Nista.
[and they collaborate here – Ed.]
A great eco protest song everyone should listen to is Joni Mitchell, Big Yellow Taxi, released in 1970 it is still as poignant today as it ever was, and shows how far we have not come since then.
A lot of today’s musicians are afraid to take on political, social, or environmental issues in fear of being typecast, and excluded from playlists. Brother Ali and Joyner Lucas tackle a lot of social issues and if you looking for someone who lives and breathes eco activism search out, Xiuhtezcatl Martinez a young American rapper  check out his song, Live as if our Future Matters

Manchester is very good at telling a certain story about itself, and musical heritage has become part of its branding. Which bits of the (hi)story do you think are important, and which bits get overlooked?

Manchester has always prided itself on its musical heritage, and rightly so, but i also feel that it’s stifled the creativity a little bit as well.
The likes of the Stone Roses and Oasis are a massive part of the history of the city but it also created something of a stereotype when people think of Mancunians – long hair, Parker coats, bucket hats and all that stuff. Unfortunately, we still see the aftermath of this over 30 years later and there is a massive percentage of Manc bands who still sound and look like Oasis. It stops us being seen as an innovative city and so it’s something that we consciously pushed against.
There is so much more to draw from in our musical heritage in Manchester. We brought House music to the UK which then led to the rave culture and the love of dance music. That’s what we try and draw on. We’re so much more than ‘Madchester’

Of course, we can’t overlook the huge problems facing live music at the moment. How do things look from your p.o.v., and what can we as residents and music-lovers do to help?

We had a UK tour that should have started in April. And an album launch at Academy Manchester planned for May. Obviously with the covid pandemic all plans were put on hold until we can fill venues again. We did manage to headline a live gig this August at the Irish world heritage centre in Cheetham Hill.
It’s a fantastic outdoor venue with capacity for 1,200 people. It went ahead with lots of guidelines and they capped it at 400 tickets, which all sold, so it seems there is a hunger from the public to get back out and be entertained.
The best thing you can do to support musicians at the moment is buy some music from a local band, instead of keeping on buying a top 40 artist. Your new favourite band is out there waiting to be found.

Anything else you want to tell us.

Give our 2017 album Missing Peace a spin. I’m sure your followers will find it inspiring for the mind, and the body will follow it onto the dance floor.

Review: ‘The Rise and Fall of America’

The ‘Rise and Fall of America’ is the urgent, propelling new single from The Moods, and it feels more stirring on every listen. 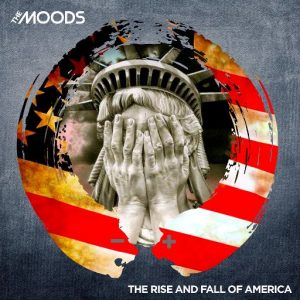 From the outset, the lyrics pull no punches. We begin with images a ‘bullet-spangled banner on a grave’ and the Statue of Liberty puts her head in hands on the single cover. Yet whilst ‘Rise and Fall’ can be read as alternative American anthem (talk of 4th July), it is clear that The Moods are not pointing the finger at a single nation. This is a system failure. We hear of conflict between generations, and climate breakdown (a sea of dead fish)

The coalition of musical styles shows similar ambition. Restless synths made me uncomfortable in just the right way (and will certainly appeal to any Sleaford Mods fans). But what sets The Moods apart from other rap-heavy bands is the sheer amount going on, from the (disapproving? empathising?) Greek chorus-style backing vocals, and the blast of brass through the last segment. Indeed, I hope to hear more of the dub and jungle influences that marked previous tracks from The Moods (Missing Peace) on their new album. The band are adding the finishing touches now – so watch this space.

In short, this is a withering musical take-down of our times, a track that gets under the skin and burrows deep into the ears.