Skip to content
4 September, 2020 Marc Hudson 1 Comment
It went exactly as we thought it would. But then, “Manchester City Council spaffs money against the wall on the production of more meaningless glossy powerpoints full of buzzwords, while calling it ‘new’ and ‘transformative’ and a ‘narrative'” is about as hard to get right as “Moon still there” and “Boris Government in U-turn shocker.”
Yesterday morning the Economy Scrutiny Committee met. It’s one of six scrutiny committees made up of Labour councillors, which are there to scrutinise a Labour executive.  There were a number of agenda items (including an important one about Northwards Housing) but life is short, so let’s keep the background simple.

We are going to get a presentation about it now. #LuckyUs.

Will it be the same tired “inward investment at all costs” bromides? Certainly some #usualsuspects presenting…https://t.co/YvUYZ8tE6Q

You can watch the presentation and the questions here. We live tweeted the whole thing at @ClimateEmergMcr.
Long story short, it was every bit (more?) embarrassing and vacuous as we predicted – “proud international city,” “young diverse city,” “resurgent city centre,” “pivot points,” “our manchester strategy” etc etc “prosperity,” “great base to work from”… “help you craft your narrative”
ALL the buzz words were ritually namechecked. Lots of incantations.

Nothing that a tolerably intelligent group of 16 year olds coming up with. How much did they PAY for this???

“partnership on the journey”.

Manchester as posterchild
Do I win the buzzword bingo???

What was interesting is this
a) several of the councillors did in fact ask okay-to-very-good questions (thanks, take a bow, you know who you are)
b) there were several (hilarious) allusions to our briefing paper and organisation(s) without us ever being named (e.g. this). It turns out we’re Voldemort, “He-Who-Must-Not-Be-Named.” Perhaps there was a fear of more apoplexy in some people in the high-risk gerontographic fora  stroke if the three words “Climate Emergency Manchester” are ever uttered together.
The main points were –
expanded airports are definitely part of “zero carbon by 2038” oh yes.

Yeah, because we will DEFINITELY have a new economic narrative that deals with the climate emergency.#Manchester‘s “thinkers” are definitely on it. Oh yes.#EconomyScrutinyCommittee pic.twitter.com/8o6ctNG1Uk 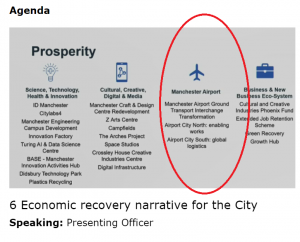 how is this “narrative” different from all the other begging documents that will be flooding into HMG departments (especially Treasury) in the coming weeks and months?

1112 Now Luke Raikes asking who the audience is for this?

Governments get a lot of these sorts of strategies, narratives from all the country. What is *UNIQUE* about #Manchester‘s document??#EconomyScrutinyCommittee

(to this good question there was, of course, no good answer)
One question that didn’t get asked was how this palaver had been organised, and how much it all cost.  So, natch, with the meeting still going, we submitted the following Freedom of Information Act request to informationcompliance@manchester.gov.uk

Dear Sir/Madam,
with regard to the report and presentation about a “new economic narrative” at Economy Scrutiny Committee on 3 September 2020.
1. Please provide the documentation about how this contract was created – adverts, tender documents, or was it just dished out without any advert etc excluding outfits like CLES.
2. Was any consideration given to doing this “in house” -to save money, or was it simply considered that the council no longer has the capacity to do this kind of thinking
3. How much money was dished out to the two consultancies to produce this wonderful world-leading work?
Please consider this a request under the Freedom of Information Act 2000

What do we learn?