Latest letter in the MEN, by core group member Chloe Jeffries. It’s about how the Council is happy to scold climate activists (esp Extinction Rebellion) but is not getting its own house in order. And yes, it is about the need for a seventh scrutiny committee, dedicated to climate change. If you live, work or study within Manchester City Council’s boundaries, you can sign that petition here, joining over 400 people online, and over 500 “on paper). And please invite us to attend your online meetings of your church, mosque, trade union, community group etc etc… 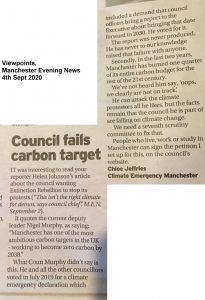 It was interesting to read your reporter Helen Johnson’s article about the Council wanting Extinction Rebellion to stop its protests (“This isn’t the right climate for demos, says council chief”, MEN September 2).

It quotes the current deputy leader Nigel Murphy, as saying “Manchester has one of the most ambitious carbon targets in the UK – working to become zero carbon by 2038.”

What Councillor Murphy didn’t say is this.  He and all the other councillors voted in July 2019 for a climate emergency declaration which included a demand that Council officers bring a report to the Executive about bringing that date forward to 2030.  He voted for it.  The report was never produced. He has never to our knowledge raised that failure with anyone.

Secondly, in the last two years, Manchester has burned one quarter of its entire carbon budget for the rest of the 21st century. We’ve not heard him say “oops, we clearly are not on track.”

He can attack the climate protestors all he likes, but the facts remain that the Council he is part of are failing on climate change. We need a seventh scrutiny committee to fix that. People who live, work or study in Manchester can sign the petition I set up for this, on the council’s website.