The Manchester Evening News kindly published a letter from Marc Hudson (core group member, writing in a personal capacity).  It includes- gasp – a reference to this petition that one or two of you may have heard of (and hundreds have signed already!)  It was edited lightly by the MEN for length (uncharacteristically, Marc did go on a bit…) 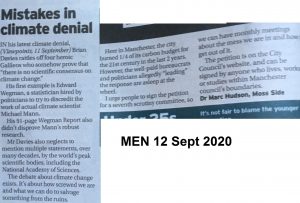 In his latest climate denial screed (Viewpoints, 11 September) Brian Davies rattles off four heroic Galileos who somehow prove that “there is no scientific consensus on climate change.”
His first example is Edward Wegman, a statistician hired by politicians to try to discredit the work of actual climate scientist Michael Mann. What Mr Davies doesn’t want anyone to know is that – as can easily be found on the wikipedia entry for the Wegman report- A 250-page study by computer scientist John Mashey proved that 35 of the 91 pages in the Wegman Report were plagiarized, and “often injected with errors, bias and changes of meaning.”  It also didn’t disprove Mann’s robust research.
Mr Davies also neglects to mention multiple statements, over many decades, by the world’s peak scientific bodies, including the National Academy of Sciences.
The debate about climate change exists. It’s about how screwed we are and what we can do to salvage something from the ruins.
Here in Manchester, the city burned 1/4 of its carbon budget for the 21st century in the last 2 years. However, the well-paid bureaucrats and politicians allegedly “leading” the response are asleep at the wheel.
I urge people to sign the petition for a seventh scrutiny committee, so we can have monthly meetings about the mess we are in and how to get out of it. The petition is on the City Council’s website, and can be signed by anyone who lives, works or studies within Manchester City Council’s boundaries.