Climate change is with us. Its physical impacts are reported (not often enough) in the mass media. The impact of climate anxiety, climate grief is (as yet) largely invisible. Like molecules of carbon dioxide, just because you can’t see it, does not mean it isn’t wreaking havoc.

We refuse to suffer in silence. Anyone who understands the science and our likely future looks on in horror at the Australian bushfires of early this year, at what is happening now the West Coast of the USA.  A key piece of work of Climate Emergency Manchester – alongside holding Manchester organisations to account – has been to sustain ourselves, to develop tools for staring into the abyss, for people (especially parents) who are freaking out, and for collective morale maintenance. 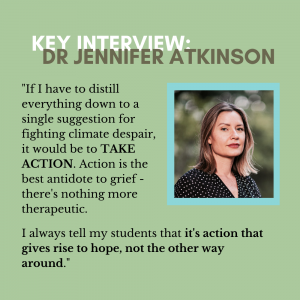 It’s with great pleasure, therefore, that we today publish an interview with Dr Jennifer Atkinson.  She kindly agreed to a request from Pooja Kishinani, CEM’s latest core group member, to talk about her work (see below).  It will also appear in the Student Guide to the Climate Crisis, which will be launched on Thursday 24th September.

Dr Jennifer Atkinson is a climate educator and Senior Lecturer at the University of Washington, Bothell. She has written and spoken extensively on the mental health impacts of climate disruption. Her seminar on “Environmental Grief and Climate Anxiety” is one of the most popular courses in the US, and she has also collaborated with activists, psychologists, scientists and educators to provide resources for people to navigate the emotional toll of climate change.

What advice would you give to a university student who feels powerless in the face of climate change? Where or how should they begin to process their emotions?

I actually have a whole series of recommendations, which I discuss at length in my podcast Facing It (which explores strategies for coping with climate despair). This might be something you want to include in your survival kit! As a bonus, the episodes are quite short — only 15 minutes each. But if I have to distill everything down to a single suggestion for fighting climate despair, it would be to TAKE ACTION. Action is the best antidote to grief — there’s nothing more therapeutic.

In fact, I always tell my students that it’s action that gives rise to hope, not the other way around. And I don’t say this in the naïve sense of believing that a single person planting trees or going to a climate march is going to solve the problem.

The real power here is that getting engaged helps us build solidarity. One of the main reasons people feel hopeless and depressed in face of our climate threat is they think they’re alone in their concern. And when we feel isolated, we are not likely to act.

So cognitive psychologists emphasize how important it is to imagine ourselves as part of a team. That sense of solidarity also counteracts the pervasive concern that our actions are too insignificant to matter (eg “Why even bother?”) My own students hit this wall all the time, and feel helpless because their impact is dwarfed by the scale of the crisis.

But if we see ourselves as working collectively rather than individually, we can recognize that all contributions sync up w/ a larger network of change. This is what adrienne marie brown calls “emergent strategy”: a movement that spirals out from all kinds of small, local actions and connections to create complex systems. Economist Donatella Meadows makes a similar point when she reminds us to think about leverage points “where a small shift in one thing can produce big changes in everything.”

There’s an example I love from Rebecca Solnit’s book Hope in the Dark: In the 1960s, the Women’s Strike for Peace was the 1st organized antinuclear movement in the U.S.  and when interviewed, participants said they felt their efforts achieved nothing at the time.  But in fact, they ultimately contributed to major victories like the ban on above ground nuclear testing (which was creating the radioactive fallout showing up in mother’s milk and baby teeth.) Here’s an excerpt from an interview with one of those activists. Solnit wrote:

“The woman from WSP told of how foolish and futile she had felt standing in the rain one morning protesting at the Kennedy White House. Years later she heard Dr. Benjamin Spock — who had become one of the most high-profile activists on the issue — say that the turning point for him was spotting a small group of women standing in the rain, protesting at the White House. If they were so passionately committed, he thought, he should give the issue more consideration himself.”

It’s a reminder that social change is hard to measure and often invisible in the moment. So the next time you hear Greta Thunberg giving some big speech before the U.N., remember that she’s just a single visible point resulting from the invisible work of thousands of unnamed people behind the scenes: scientists, activists, journalists who brought attention to the climate story, the teachers who ignited her awareness, some anonymous passerby who said an encouraging word to keep her going  during the first winter of striking alone, and all the youth climate strikers spreading and amplifying that message & having impacts of their own which are impossible to trace or may not be visible until years down the road.

That should be reason for hope rather than discouragement. Because every time we have a conversation or share a book or inspire someone through our work, those actions may get multiplied by a larger community that we’ll never even meet.”