Do you know where the Green Quarter is? You might mistake it for several other locations in central Manchester, given the tendency of the current administration to create shiny new quarters and zones. The Times is certainly a bit confused. When it named the Green Quarter one of the coolest places to live in the UK in 2018, it used a photo of Liverpool’s Baltic Triangle. And if you gestured to this patch north of Victoria on a map to any 19th century resident, you would receive a quizzical ‘eh?’; they knew this area as a slum called Red Bank. 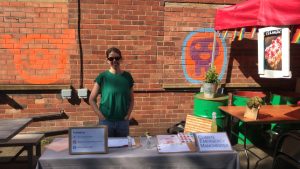 Today the Green Quarter is a ‘trail’ of breweries and bike shops (hence The Times article). It has new housing (property developers certainly know where the Green Quarter is: google the term and you’ll mainly get directed to apartments to rent). It also has GRUB, the legendary street food event which moved from Mayfield depot to a new home here in 2019. As at the former site, all Sundays are ‘plant-powered’. CEM were delighted to pitch up in the new eco garden,  bask in the last blast of summer and safely collect signatures for our petition.

Many of the punters – and signatories – were neighbourhood locals, appreciative of this oasis on their doorstep. Indeed, the GRUB gardener even swung by (and signed). All those who came up to the stall remained socially distanced and observed a strict ‘gel-in, gel-out’ system. We came equipped with visors and sanitiser, quarantining all signature sheets at the end of the event. 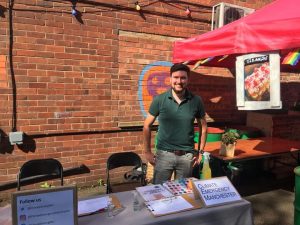 GRUB welcomes a rotating cast of traders. This Sunday we were lucky enough to be next to Paradiso Authentic Italian – purveyor of divine (vegan) tiramisu, whose handmade signs and stall from reclaimed materials seemed to perfectly capture the spirit of the eco garden. As for the deserts: they sold out! Over on the ‘savoury side’ we feasted (petitioning is hungry work) on dumplings and Sri Lankan food from Archchi’s – the latter an inspiring example of a trader couple who started their business during the pandemic.

We collected over 40 signatures, and a particular thanks is due to the GRUB team – safe and supportive throughout – who did a whip round at the end to fill our last sheet! The enthusiasm of all those who signed suggests that this quarter of the city maybe does deserve to be known as ‘green’.

If you live, work or study within Manchester City Council’s boundaries, you can sign the petition and then share it on social media, and invite Climate Emergency Manchester to attend any online meetings where there will be lots of Manchester folks present.   Even if you don’t, you can share the petition with people you know who are eligible to sign. Please do so – Manchester needs much more action on climate change (the city burned through a quarter of its entire twenty-first century carbon budget in the last 2 years), and those in charge don’t seem to care, or to think that a massive increase in activity is required to get the city on track.