Deadline day has arrived. Official petitions to Manchester City Council have cut-off points, and the end date for requesting a seventh scrutiny committee, focused on climate change, is November 10th 2020.

Since launching the petition on the Council’s faffy website in February, Climate Emergency Manchester have collected over 1,500 signatures. This falls short of the target (4000) which would force a debate among all 96 of the city’s councillors. But with well over a thousand signatures, and with signatures from all of the 32 council wards, we expect to be invited to the Neighbourhoods and Environment Scrutiny Committee in due course, for a hearing.

Proper scrutiny is needed to break the Council’s cycle of making promises about climate action but not delivering. That dynamic must be challenged with tough questions and hard truths, which a scrutiny committee can deliver (as our scrutiny handbook makes plain). Every valid name online and on paper supports the demand for more scrutiny, transparency, and accountability. We are proud to have registered support for this from over fifteen hundred people who live, work or study within Manchester City Council’s boundaries.

What work goes into the collection of 1500+ signatures?

Achieving signatures is harder than it seems for a small community organisation, reliant on volunteers, with hardly any funding, in a year when Covid-19 has ma 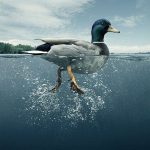 de face-to-face organising and signature collecting extraordinarily difficult. Like a raft of ducks swimming upstream, the effort below the surface is hard to see. Here is our underwater camera attempt to make some of Climate Emergency Manchester’s duck legs visible.

With much activity forced online during the pandemic, CEM broadcast the petition consistently through social media (Twitter, Instagram, Facebook). Periodic blogs on the website notified supporters about campaign progress, signaling ways to help out and get involved. Our infographics explained the importance of a scrutiny committee visually. Videos from supporters, in multiple languages, expressed why the petition was important to people from different walks of life. Nine interviews with signatories at various milestones gave a voice to the people who recognise that Manchester is failing to take the climate emergency seriously enough.

The force of tasks

In September, the Petition Task Force was launched, with its own 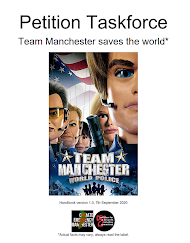 handbook. The task force attracted half a dozen people, in addition to the core members of CEM: these were people who appreciated the chance to develop skills and cultivate relationships that can help sustain a movement over the longer term, and who were willing to take action in the shorter term. Through a series of hourly meetings on Friday afternoons, plus Slack channels for regular communication, the task force became the forum for coordinating action on the petition in its latter stages.

One such action was securing support from more than fifteen Manchester organisations and civic groups who signed an open letter calling on the Council to go further on climate action by agreeing to regular scrutiny. Manchester’s trade unions also showed us their support, as did local independent bars and shops, including Sandbar, Epicurean craft beer shop, Station Hop bar, Ludo’s epicerie, Lentils and Lather zero waste shop, Bud garden centre, and the Old Abbey taphouse. Manchester Museum helped promote CEM’s complementary Student Guide to the Climate Crisis and facilitated a video shout out from the University of Manchester’s amazing Chancellor Lemn Sisay. 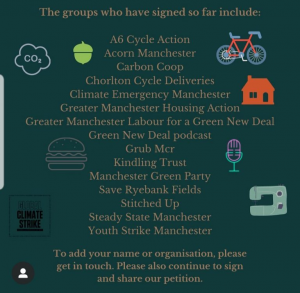 Dialogue with local journalists, and press releases about our innovative activities like crafting beer mats, helped us secure coverage in the Manchester Evening News, Big Issue North and The Northern Quota. Meanwhile, Stitched Up gave us a platform to publish an informative Seventh Scrutiny Committee Q&A, subsequently re-posted in The Meteor. Details of the petition were circulated at Manchester University NHS Foundation Trust via their Sustainability Team newsletter. We appeared on local podcasts including MCR Green New Deal podcast, NW Young Fabians and All My Friends MCR. 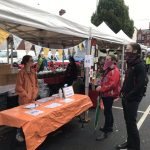 In “real life” – where possible with covid restrictions, and with safety concerns paramount – we held stalls during evenings and weekends in locations around Manchester such as Levenshulme Market, Grub, and at city centre Makers Markets. Having conversations at these stalls, and collecting a large number of signatures there, gave the campaign a boost, especially when we were otherwise struggling to gather names via the off-putting online petition registration system that we were constrained to use.*

With help from some talented, generous graphic designers and from some 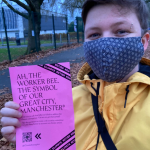 impressively efficient leaflet distributors in our friends list, we distributed several thousand flyers about the climate emergency. We made use of distribution networks from supportive organisations like the Kindling Trust, and the Have a Banana fruit and veg stall. Our leaflets and posters highlighted, with vivid colours and amusing language, the need for climate action in Manchester, and the need for the Council to step up to scrutiny.

The people who worked so hard to make these things happen deserve credit and praise for their achievements. We will take stock and learn from these last few months of campaigning, to help build our power. Our networks have expanded, presenting new opportunities through identification of supportive individuals and groups (e.g. we have a new database of schools taking climate action). Collecting petition signatures may be over, but we will keep campaigning for proper scrutiny of the local response to the climate emergency.

CEM provides the opportunity for people in Manchester to learn skills and make a difference by engaging in rewarding climate activism over the long term. This is part of our work on active citizenship. If you missed out on the petition campaign, but want to get involved in our plans for the future, then get in touch and we’ll let you know what is happening (contact@climateemergencymanchester.net).

* Unlike signing on paper, signing online can take people ten minutes to navigate or more. In many cases people did not manage to sign at all, because the system was so complicated that they gave up, despite our efforts to explain how to sign online. We have no way of knowing the full extent of these ‘lost’ signatures. Whether by accident or design, this system makes it hard for citizens to engage with MCC through petitions, and limits participation in local democracy: we think it’s time for change, here, too.

2 thoughts on “Over 1,500 signatures and a raft for the climate emergency. How did we get here?”