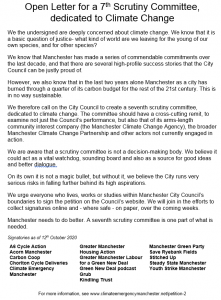 “It’s heartening to see so many other groups come out in favour of a scrutiny committee.  With monthly meetings, we’d be able to see what progress was and was not being made. Good ideas could be brought forward and become part of the plan for radically reducing emissions. Given that Manchester has burned a quarter of its entire carbon budget for the twenty-first century in the last two years, the status quo is not acceptable. We look forward to working with all these groups, and others, in the coming weeks as we get more signatures on the petition, but also in the coming months and years.”

The text of the pen letter is available here, along with an up-to-date list of signatory organisations.

If you want to sign, as an organisation or as an individual, please get in touch with us via contact@climateemergencymanchester.net