Petition updates and call for support

Almost 500 people have now signed our petition online. 476 fierce battles with the Council’s online petition signature registration system have resulted in a winning name successful added to the call for a climate change scrutiny committee. 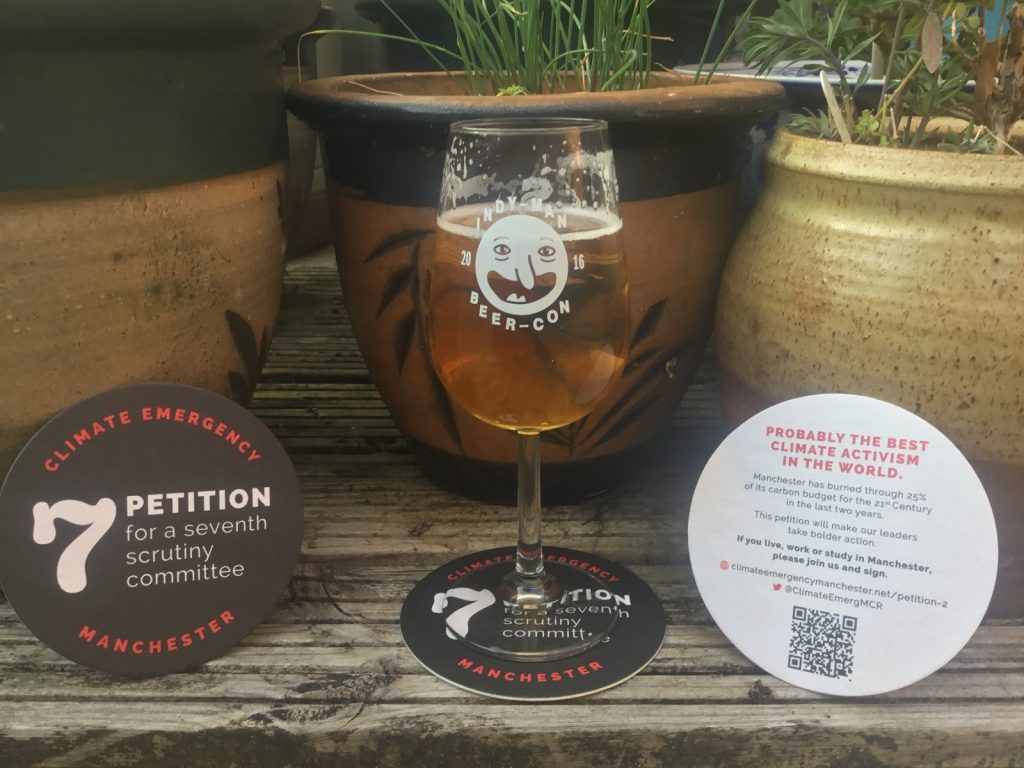 Our climate activism beer mats have been delivered to pubs including Station Hop and the Old Abbey Taphouse, the craft beer shop Epicurean and the Epicerie Ludo deli. It’s only probably the best climate activism in the world…

As thousands of students return to Manchester, and hundreds have already been forced into quarantine, CEM has been sending solidarity in the form of a Student Guide to the Climate Crisis, which launched last week. Its content on engaging with universities and local authorities, and dealing with challenging emotions, could well be useful for students facing uncertain weeks ahead. There are great tips for engaging with petition campaigns too.

We are still asking people to sign the petition and share it with people they know. Volunteers are very welcome to join the campaign, to help in small ways or large. Send us a message at contact@climateemergencymanchester.net to express your interest, and we’ll let you know more about ways you can help.

In the coming week, we are gearing up our social media efforts, with sights set on 7th October as a day of online action for the 7th scrutiny committee. For that reason our doors are especially open for anyone with skills in digital content creation who can help us create social media content for a few hours. Can you create content as good as, or better than this?

If so, we’d like to hear from you! The line’s open: contact@climateemergencymanchester.net

What this campaign is about:

At the moment climate action gets very little real scrutiny. This means mistakes are buried and missed targets are not reported on.

If we get 4000 signatures from people who live, work or study in Manchester City Council’s boundaries, there will be a debate and vote in full council (with all 96 councillors) about setting up a seventh scrutiny committee on climate change.

We have until November 10th to collect those signatures.

1 thought on “Petition for a 7th Scrutiny Committee – weekly post”