Robbie Watt, co-lead of the Petition Taskforce has some good news about the petition for a seventh scrutiny committee.

Manchester Trades Council supports the petition
The Manchester Trades Council brings together representatives from the local branches of a range of trade unions. It has a long history dating back to 1866, and usually meets monthly at the Mechanics Institute. In October 2020, via Zoom, the Trades Council voted in favour of supporting Climate Emergency Manchester’s petition for the creation of a seventh scrutiny committee at Manchester City Council, in order to promote democratic scrutiny of the city’s response to the climate crisis. 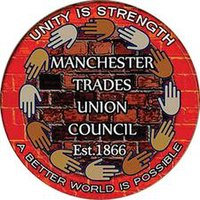 It is hugely significant that the trade union movement has given its backing to this campaign, particularly at a time when many workers are facing difficult, often hazardous working conditions, or else pay cuts and job losses during the coronavirus crisis. The social and environmental challenges in Manchester, and around the world, are overlapping and interlinked. So too are the struggles for a better future. CEM sends its solidarity to the members of the unions in the Trades Council, and offers its thanks for the decision to support the petition. We note the support and hope to work together now and in the future to promote a vision of a green new deal that would do justice for workers and genuinely address the climate emergency in Manchester.

Compass Manchester supports the petition
Compass, which you may remember as an influential left-of-centre thinktank during the (former) New Labour era, is now a multi-party, non-partisan platform for progressive discussions of policy questions. Compass has a new Manchester branch that has offered its support for CEM’s petition. This adds to the number of voices calling on the City Council to take the climate emergency seriously by setting up a scrutiny committee dedicated to tackling it. Thank you, Compass Manchester!