Manchester City Council set up a “community interest company” (CIC) a few years ago.  Okay, that’s not a sentence that grabs attention, but this stuff matters: please keep reading.

The CIC was originally called the “stakeholder steering group on climate”, a nod to the fact that it was taking over from a group which had been set up in 2009/10, after the first “Manchester Climate Change Action Plan” was agreed. That plan had called for a “stakeholder steering group,” with elected members. The group would – among other things – organise an annual day-long conference for stakeholders to swap notes, hold the council to account etc.

Between 2010 and 2015 this “steering group” had been hilariously and grotesquely shambolic, and it had frequently been forced to reveal information it would rather have kept secret because of Freedom of Information Act requests (FOIAs). Mind you, everyone knew that the annual day-long conferences had not happened. There was one in 2010, nowt in 2011, two half-day jokes in 2012 and 2013 and then… nothing. The elections never happened either, of course.

So, in 2015 to “solve” these problems (not of delivery, you understand, but of presentation) the CIC was set up, with a name change to the grand title of “Manchester Climate Change Agency.” The added benefit was CICs don’t have to answer Freedom of Information Act requests  (a real “Agency” – a statutory body – would).

Manchester City Council has spent nearly half a million pounds supporting this “Agency” which has delivered… glossy pamphlets and 90 minute “conferences” which are all gaslighting and greenwashing, trying to get you to ignore the fact that the city has burned through one quarter of its carbon budget for the entire 21st century in the last two years. It has also bid for European cash, with very mixed results. It’s a creature of the City Council, basically.

Last year and this year, the Agency has been advertising for a new “chair” for the climate change “partnership” it runs (the partnership is made up of big organisations the Council has a close relationship with, which also need to seem green. Its mutually supportive and reinforcing).  Before COVID (i.e. a million years ago) Manchester City Council even boasted that it was going to “underwrite the costs of supporting the role“. A FOIA revealed they had not however approached the partners they said they would need to.

Well, the applications for the role of the chair closed on 21st September (and this don’t forget was a major extension – they been supposed to close in early August.  And again, they’d FAILED to find anyone last time round). 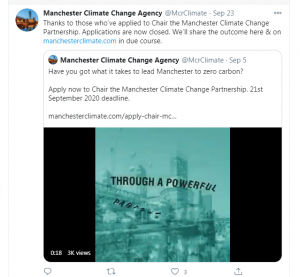 We’ve sent the following to one of the two Council staff who are seconded – full-time to the “Agency”.

Dear xxx,
the applications for the chair of the Agency/Partnership chair gig closed on 21st September, and on 23rd the climate change agency tweeted that there’d be an announcement in “due course”  on the manchesterclimate.com website.
Well, it’s the best part of two months later, and there’s been no announcement on the website.
As someone who pays council tax, and therefore has helped fund the almost-half-a-million-pounds-spent climate change “agency”, I’d like to know answers (for publication) to the following.
a) how many applicants were there?
b) how many applicants were shortlisted?
c) how many interviewed?
d) was the job offered to anyone or not?
e) if yes, did they accept, what is their name and when do they start?  Why the delay in announcing?
f) if not, why not and will the Agency be re-advertising again, or giving up?

Seven weeks from close of applications on… no word. Thank goodness climate change isn’t an emergency or anything…
And on 11th November, in reply to the above email, we are told that there will be an announcement next week.
Will the announcement be of an actual person recruited, or some cobbled-together compromise where different members of the “partnership” are saddled with role of being rotating chair? Or some other imaginative cover for ongoing failure?  Watch this space

Dear @BBC,
when you're ready to report on the news again, perhaps this from the @FT is where you could start?

https://news.sky.com/story/up-to-a-third-of-land-species-and-half-in-the-sea-face-extinction-if-climate-change-is-not-slowed-new-study-reveals-12269399
"Green space" is not just good for humans - and it is not just exotic, tropical species that are threatened. In a sane world, local governments would also take into consideration the well-being of non-human in their decisions. How do we help this happen?

Cars (BEVs or not) take up a lot of space (roads + parking) and are dangerous to all other road users. Imagine if we acted on that information and radically reduced the number of cars in Greater Manchester...what could you do, in a city that put people before cars?

Our community shares offer has got off to a flying start. Over £300,000 committed in just 6 days! No way this would have been possible without the support of the Power to Change (@peoplesbiz) & @CooperativesUK & their Booster Programme. Thank you so much! #commshares #coop