On Monday we teased you with the cover of the Student Guide to the Climate Crisis, which will be launched next Thursday, 24th September, at 7pm.

On Tuesday we gave you a taster- the great interview with Dr Jennifer Atkinson, about climate anxiety and what to do.

Now, below, you can read another article from it, this time by CEM core group member Marion Smith.   It’s all about local authority action (spoiler – councils are more than just about bins and sending a noise officer to turn the sound system down from 11 because the neighbours can see their bones vibrating) 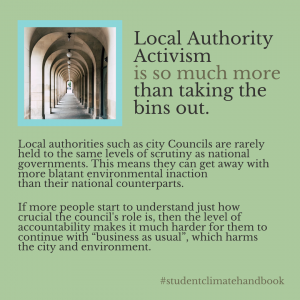 If you’re thinking about participating in any form of activism, there are different levels of authority and bureaucracy that you’re likely to come up against. One that probably springs to mind is NVDA against national government, which can be very important and exciting work- but that’s not the only level of activism you can engage with. In this section, we’re going to discuss climate action at a more local level- for instance, campaigning against your City Council.

Climate Emergency Manchester is trying to help build a diverse climate justice movement in Manchester. It also holds Manchester City Council to account over the lack of action on its climate emergency policies. This means that I spend significantly more time than most other people of student age dealing with the bureaucratic workings of this organisation- and this is something that seems to confuse a number of my (younger) friends and acquaintances. Here are a few quotes I’ve heard from friends when I’ve told them about the work I’ve been doing:

“The City Council? Yeah, they’re really annoying. I forget about them until I get those council tax letters.”

“I’d never really thought about doing any activism on a local level. I just associate the Council with bin collections.”

“…Why are you bothering the City Council about climate change, not the government?”

These comments are pretty representative of student opinion on local government. If you’re a student reading this, it’s likely that the main associations you have with the city council are “bin collections” and “council tax letters.” However, the City Council plays a far more crucial role in climate policy than you’d think. Here are a few examples:

If you’ve looked upwards recently, you’ve seen the Manchester building boom –  new shiny glass skyscrapers seem to spring up overnight. These buildings are directly approved by the Council, and although these towers may look flashy and help put Manchester “on the map”, the lasting effects for the environment are anything but positive. First of all, there’s all the construction waste and emissions that goes into building the skyscrapers. Secondly, if you think about it, those towers are essentially big tubular greenhouses- imagine the amount of energy required to keep them cool in the summer months. We know that with rising global temperatures, things are only going to get hotter- now think about the amount of energy that will be needed to cool these buildings in five years time. This isn’t even touching on the gentrification of housing that’s taking place during this building boom- that’s a related and equally worrying problem.

Another example is Manchester Airport. You probably know already that air travel is a frequently discussed element of sustainability- to put the impact of air travel in perspective, a return flight from the UK to Australia is equivalent to an entire year’s worth of carbon emissions produced by the average person in the UK. Air travel is clearly a significant problem when it comes to the climate crisis- and yet Manchester City Council owns 35.5% of Manchester Airport. For an organisation that’s supposed to be dealing with climate change issues within the city, that’s not a good look.

Local governments are also responsible for transport in the cities they serve- we know that transport is another important element of climate justice, and the effects that improved transport can have on a city’s emissions can be pretty transformative. Put it this way, if public transport is significantly subsidised and far safer cycling routes are introduced, then the congestion from cars on the roads can be massively reduced. Whilst this clearly hasn’t happened in Manchester yet, this is a good example of how better climate justice doesn’t just improve environmental concerns, but also the economic concerns of those who are most deprived.

Unfortunately, the pivotal role played by the city council in both infrastructure and climate bureaucracy still isn’t common knowledge. If you mention to someone outside of climate activism that you campaign on a national level, you’re likely to be met with impressed responses- opposing national government is something that people are familiar with, and it’s often considered to be both exciting and impactful. Campaigning at a local level about your city council probably isn’t going to elicit the same response. If I’m honest, this work just isn’t very sexy stuff. Don’t get me wrong- this isn’t to say that I don’t enjoy the work that I do in CEM. I really do love the stuff I’m doing, and it’s something I find a lot of meaning in. But when this work occasionally involves me sitting in scrutiny committee meetings and wading through local administrative issues, it just isn’t the most entertaining thing I could spend my time doing.

The problem here is that local authorities like Manchester City Council know that this bureaucracy can seem wildly dull to those unfamiliar with it- and they use this to their advantage. Local Authorities are rarely held to the same levels of scrutiny as national governments, and this means they can get away with more blatant environmental inaction than their national counterparts. For example, last month MCC released a report detailing that in the last two years, Manchester has burned through a quarter of its carbon budget for the rest of the 21st century. This is completely scandalous information, but it’s also something that most citizens of Manchester probably aren’t aware of- that’s because this report is buried in layers of bureaucracy and glossy spin that you have to actively search for. If more people start to understand just how crucial the council’s role is, then the level of accountability makes it much harder for them to continue with “business as usual”, which harms the city and environment.

If you’ve made it this far, you might be wondering “why on earth is she doing it? What is in it for her?” Good question. My answer is this –  this work is far more meaningful than if I was campaigning at a national level. I joined CEM after coming to terms with the climate crisis, because I knew for the sake of my own sanity that I had to involve myself in some kind of climate activism- in short, I had to do something. At a local level, I can see changes being implemented as a result of the actions of groups such as the one I’m part of.

This handbook has already outlined the different forms of climate activism that you can engage with- I should reiterate here that this is my own perspective from the kind of climate activism I engage in. Your personal motivations and stake in the activism you involve yourself in are pivotally important. If local boring work still doesn’t appeal to you, that’s ok- you just need to find what works for you, and keep doing it.