Juan Villanueva reports on the latest meeting of the one scrutiny committee that has climate change in its remit. It was once again silent on climate.

Today the Neighbourhood and Environment Scrutiny Committee gathered online to examine what the council is doing. The main points of discussion were waste management, (with special attention at what Biffa has done during the pandemic), and the highway maintenance programme. Although the meeting lasted 30 minutes longer than usual, they even didn’t mention the carbon emissions.

Regarding the transformation of the roads to adapt them to an active and safe travel, the main point was the money. Cllr. Angeliki Stogia, Executive Member for Environment Planning and Transport complained for the requests from the government to facilitate the Emergency Active Travel scheme without an economic support, and with ‘ridiculous’ deadlines.

“The government made an announcement they were going to make £250m available across the country. They gave us £3.1m in terms of the first tranche. The second tranche in Greater Manchester was round about 13 million”.

She didn’t mention other cities around the region actually made use of these Emergency Active Travel scheme.

Regarding the other report, let’s be honest, it has been tough times regarding Waste, Recycling and Cleansing’s matter. During the lockdown, due to the time spent at home, there has been a significant increase in household waste; +15% of residual waste  and +17% on the mixed recycling. Here it’s worth saying that Greater Manchester ONLY recycles plastic bottles, apart from paper, glass and aluminium.

Obviously, this topic is close to the hearts of residents in the city, and many of them have complained to their Cllrs. So, most of the members of the committee had something to say about their ward. However, the most cited issue has been missed collections and the state of the passageways.

The Strategy Lead on that area said: “Covid has presented many challenges for us, not least with additional volume of waste.” She continued talking about how Biffa has tried to cope with it. They rescheduled the bin collections, changing the organic bin into winter mode, (i.e. each fortnight), to free up some resource to put into other bins. Although for some councillors it has been not enough due to several of them asked the same questions.

In addition, Cllr. Hughes, from Gorton, complaint that in his ward bins are missed on regular basis and in the same area. The Strategic Lead explain that Biffa make its collection routes with many factors in mind, and sometimes they don’t finish the route. But Hughes stressed: “it’s not just one off. It’s missed very very regularly.” 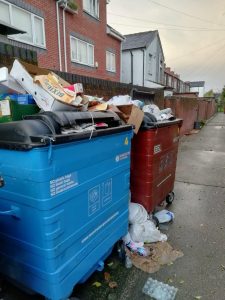 Finally, Cllr. Flannagan from Miles Patting and Newton Heath launched an uncomfortable question, which didn’t go through the chair. Green bin collections, bin deliveries and bulky service were suspended during 60 days. so “why do we still to pay for this service when Biffa can not provide it?”

So, the committee scrutinises the roads and the rubbish.  But the biggest long-term problem facing the council, the city, and our civilisation, is once again not on the agenda. This is why a seventh scrutiny committee is urgently needed. Please sign the petition, and share it widely.