Regular readers of the Climate Emergency Manchester website may possibly havae noticed our campaign to get 4000 signatures on  petition for a seventh scrutiny committee, dedicated to climate change.

Every time we hit a milestone in our efforts, we’re going to publish an interview with someone who has signed and is helping to collect more signatures.  Now that we have 600 online signatures (to accompany over 600 on paper), we are turning to Jackie Haynes.

Who are you, what do you do, why did you sign the petition? 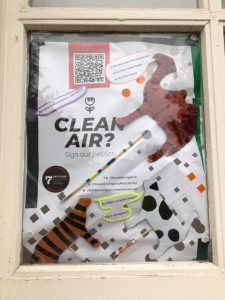 I’m Jackie Haynes, an artist and Manchester resident looking on in dismay as Manchester seems to kid itself that it has any handle on the climate crisis, which is why I signed the petition.

Have you tried to get other folks to sign yet? If so, how, and how did that go?

I’ve done my best on social media, made and set up related artwork in Platt Hall windows on view to passers-by to encourage people to sign. For the final push, I’ll be pulling rank on my birthday, asking friends to consider signing as my birthday present. As there’s no age limit and all that’s required is an email address, I’m hoping my secondary school-aged daughters will ask their friends to consider signing too… whose future? Their future!

If Manchester City Council DOES set up a permanent ‘Climate and Environment Scrutiny Committee’ what should its first actions afterwards be?

To think global, act local and set up genuine accountability to realistic targets with adequate resources. If people know they are going to be scrutinised and the criteria in advance, they would hopefully act accordingly and with urgency. Manchester wards should be properly resourced to have regular consultation with residents, rather than the wishy-washy suggestion that they are encouraged to have just one. That’s not the language or urgency required of an emergency!

How do you think citizens could/should act to make sure that such a declaration is followed up with actual actions? What skills and knowledge are needed for that?​

How hard has each councillor fought for their position? Citizens should make it be known that their local election vote is not to be taken for granted. I’d like to see more Green councillors and the climate emergency treated like the emergency that they’ve declared that it is. The 7th Scrutiny Committee would leave nowhere to hide, which is maybe why they haven’t initiated one themselves. It’s obviously wrought with complexities, but that’s no reason not to try. I think people would respect them for that. The publication showing the skills and knowledge demonstrated in the Climate Scrutiny Committee meeting reports will set an example and be an inspiration to us all! Council tax money well spent! Otherwise we need to communicate with each other in as many creatively intersectional ways possible.

The petition counter keeps moving up, despite being in difficult Covid times and in my mind, MCC should lower the number of signatures needed to acknowledge this. However, CEM’s done an amazing job of raising the issues which won’t go away until addressed. As it’s possible that even with this public outcry, MCC might have the obligatory meeting and still decide not to implement the 7th Scrutiny Committee, people are mobilised and have met each other which is something to move forward with to the next focussed objectives.