Dr Jane Zelikova (@j_zelikova) is a climate scientist and activist in the US. She works for Carbon 180, is the co-founder of  500 Women Scientists, and has a book chapter in the new collection All We Can Save: Truth, Courage and Solutions for the Climate Crisis. On the eve of the US election, Jane tells CEM about her experiences of climate science, activism, and policy work in the USA.

What drew you into climate science and activism? 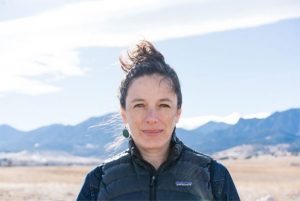 I grew up in the Soviet Union and I think activism was kind of in my blood. We went to a lot of demonstrations and I was always an outspoken person. But climate activism took a while. I only became a strong climate activist in the last six or seven years.

I went to grad school to study ants, and the other students in my cohort were studying different aspects of climate change. Through going to their talks, reading their proposals and papers, and having lots of discussions, it became obvious that my research was narrowly focused, and was ignoring the bigger environmental changes occurring. So halfway through grad school I shifted focus and studied how climate change is impacting ants, specifically seed dispersal. When you have a large environmental change happening, you have some organisms that can respond more quickly than others. What happens when they are in a tightly linked relationship? How does that relationship fall apart? That’s what I ended up studying for my PhD.

My understanding of what it means to be a scientist has changed a lot. In grad school, we were taught to focus on the science, stay objective – we were basically taught that science was objective. I had no background in the history of science, and I just assumed that was true. But in the process of doing science, you realise that science is done by scientists, they are humans, they come in with all the biases that any other person has. Science reflects the people engaged in it, and those people are largely privileged, largely from the upper echelons of society, largely white, at least in the US. Science is representative of one sliver of society. Once I realised that, it kind of blew up my brain!

I realised I could be a good scientist and still have strong opinions, still share those opinions, and those opinions wouldn’t alter my scientific work. I can have strong feelings and grief – around not just watching the world change, but actually going out and measuring how it’s changing. It’s okay for me to have those feelings and to share them.

You have written a chapter for the new book All We Can Save. What’s it about? 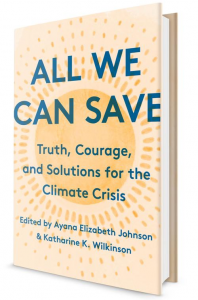 I write partly about my own experience. Growing up in the Soviet Union, I liked digging in the dirt, and ultimately, I made a career out of studying the soil. But in my research on soils, plants, carbon cycling, and how climate change is affecting those processes, I was watching these ecological relationships falling apart.

I then talk about the mighty but invisible power of microbes in the soil, and how they are responsible for important transformations of different forms of carbon, including taking carbon that plants capture with their photosynthesis and storing it for decades to hundreds of years underground. We have these important organisms that we can’t see, that we don’t think about, that are driving the most important transformation of terrestrial carbon in the world. They are making change in an invisible way, under our feet, without us noticing.

If we want to harness the power of microbes, we have to think about how we produce food. Globally, soils are put to the service of food production, either for us or the animals that we eat. We have an opportunity to rethink how we grow our food, and how we manage our soils, potentially to store carbon underground.

We can build resilience and address the changes that are happening now in climate, and provide a climate solution that isn’t going to solve everything – it’s just a part of the portfolio of things we have to do – but it’s really important. Even if we can manage soils to store 5-10% of the emissions we put out in the atmosphere, that is meaningful because every percentage counts. Soils are important, and they provide a lot of ecological benefits and human benefits beyond the carbon they store, so we should be doing that regardless.

I also try to root the chapter in this perspective in ecology which shows that diversity is important. There have been countless studies over the last 100 years which look at the importance of diversity for ecological function. More diverse ecosystems become more resilient as diversity increases. But when we think about climate action, it is still driven by the same homogenous group. We are leaving out this important process that is rooted in diversity, diversity of perspectives, diversity of ways of thinking, of ways of doing things, of ideas. We are leaving all that on the cutting room floor by giving power and resources and time, and our attention, to just one group of people who have already been driving this conversation, and driving it into the ground really.

Which group of people are you referring to?

Okay, I’m just going to say it very plainly – it’s old white guys. Old white guys have been driving this whole conversation around climate change and climate action. They have had all the resources, all the attention, and because society is tailored around white guys and their needs, we end up not critiquing or questioning or scrutinising the ideas that come from that group. We end up accepting their ideas as ‘the solutions’. We end up leaving all these other people and their ideas out of the solutions base.

How has the Trump presidency affected you, your work, your activism?

When Trump got elected my life got thrown upside down. I was working on climate policy in Washington D.C. at the Department of Energy and my job fundamentally changed. The new administration wasn’t interested in any kind of climate work at the Department of Energy. The people who came in to transition to the new administration were scrubbing the words climate change out of documents, were severing all the relationships we had been building with other countries around climate change. They couldn’t remove the funding for the research, but they changed the rules of how things were funded, so that if you had climate change as a leading topic for your research proposal, it was much less likely to get funded.

Luckily, after 6 months of the Trump administration, I was able to leave. I got a job at Carbon 180, so I could continue working on climate from outside the government. That meant leaving my job, leaving D.C., moving and really shifting gears to work in a non-profit, which I’d never done before.

The other big thing was starting this organisation 500 Women Scientists, which really started at the 2016 election in the U.S. It has continued to grow and is now this global organisation of women scientists who are taking action in their local communities, taking action to make science more inclusive and equitable, and that takes up a lot of my free time. It’s been an organisation I’ve been running for the last four years, and as we grow my responsibilities grow. My life is really different than what it was. A lot of my life goes towards this kind of activism that I didn’t previously do. A lot of my nights and weekends go to that. Sometimes it’s ten to fifteen to twenty hours a week. It’s a lot of time and effort, but it’s fine because we are a whole team of people doing that, not just me.

How do you find things like delegating, maintaining morale, etc?

Sometimes it’s hard. Sometimes the things that we work on are difficult. People get burned out because people have their full time science jobs, and 500 Women Scientists is on top of that. During a lot of the black lives matter protests, a lot of the folk on our team are women of colour, so I think it’s personally difficult. It’s difficult with Covid, a lot of the women on our team are parents and have additional responsibilities that they didn’t have before. So sometimes it is really hard to keep up morale, but I think one thing that unites everybody is that we want to be action oriented, and even when things feel overwhelming it feels good to be a part of a team that is making a difference.

I’m surprised we’re still here four years later and that we have been able to grow so much on volunteer effort. A couple of people have burnt out. We’re in a difficult position now because we have the resources to start paying people, but we have to make decisions about who gets paid and what. That will probably be harder than anything we’ve ever done. I know that it’s hard for non-profits to make this transition, so I expect it to be hard.

Carbon 180 is really busy. People are still trying to do policy, and when there is an election, organisations write transition books that set out the actions the new administration should be taking. We are writing a transition book that is focused on carbon removal, explaining what the federal government should be doing with executive orders, with directing the federal agencies to do things, setting up new committees. It’s a very long document and it’s taking everybody’s input to get into shape, when it needs to be ready to go by the end of this week.

Does Carbon 180’s work change depending on who wins the presidency?

We don’t really work with the Trump administration. If Trump were to win, on the policy side we’d basically work with Congress to continue funding carbon removal research, and make progress that way, kind of circumventing the president. That’s what our strategy has been for the last four years, to focus on congressional action, growing research capacity, growing the understanding of what carbon removal is, and socialising the idea that we can’t meet carbon goals without it. So, it has been sidestepping the big giant elephant in the room.

Any advice for people in the UK dealing with difficult political circumstances here?

I think when you are dealing with an administration, or people in power who are very antithetical to the very foundations of science and making evidence-based decisions, when it is inconvenient, I think… my default is to go grassroots. People are more reasonable on an individual basis than the people we elect. As a mass people are terrible, but on an individual level people are reasonable. So, it’s about going back to the basics of grassroots organising around issues that affect everybody. Climate affects everybody in different ways. It’s about finding the root of those personal experiences people have of climate change, and having reasonable conversations about them, and growing a grassroots movement rather than a top-down movement, when your tops are not reasonable.