Today the Neighbourhoods “and Environment” Scrutiny Committee meets. Yet again there is no report on climate change, despite the inconvenient fact that the city has burned a quarter of its 21st carbon budget in the last 2 years. Instead the “leadership” of Manchester is just persisting with the usual spin and small “workshops”.

Climate Emergency Manchester is for people who are angry about this, but not (yet) ready to give up. It’s for people who believe that we need to keep close track of what is and is not being done. 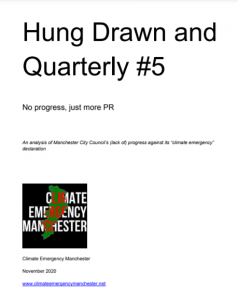 Today we release another “Hung Drawn and Quarterly” report, where we reveal some of the answers to the Freedom of Information Act requests we have submitted.  We want to emphasise that we shouldn’t have to do this. Real leadership is about being honest, transparent about the challenges we face. Not hiding, not wasting tens of thousands of pounds on fact-free advertising campaigns, or creating a tickbox on the Capital Gateway that isn’t even being measured…

This report, produced because Manchester City Council is not doing its own reporting, reveals that:

1)  The much vaunted “carbon reduction measure” in the “Capital Gateway” is meaningless as  “Data is not collected on whether projects have been forced to change because of the introduction of this approach into the checkpoint process.”

3) Carbon literacy training has been abandoned

4) The Council spent over 30 thousand pounds on an unscientific propaganda campaign.

If you want to get involved in what we do, please email us at contact@climateemergencymanchester.net