Kooj from @crossingfprints invited Adam, core group member of CEM) to participate in a panel discussion on Saturday 25th September. It was the final part of a diverse afternoon of songs, art, poetry, video, media, discussion, debate and community connections on the crucial question of how we can raise our voices to protect our environment. Here Adam gives his reflections.

The event was held in the performance space of an impressive building complex that houses Oldham’s library, art gallery, learning centre and museum artefacts – well worth a visit if you want to explore somewhere outside the city centre bubble. The discussion panel was refreshingly diverse compared to what I normally see at more corporate events where they struggle with gender balance let alone anything else. Other members of the panel included 3 other members of Manchester Art Gallery Climate Justice Group (I’m a pseudo member as well): Emmanuela Yogolelo, Rabia Begum & Kooj Chuhan as well as Sai Murray (writer, poet, performance and graphic artist as well as being a Trustee of the Racial Justice Network) and Murad Chowdhury a local teacher and artist of Bangladeshi heritage.

By the time I arrived numbers had thinned a little, but there was still a 20 strong group remaining for the discussion panel, but unfortunately a number of the community participants had left. 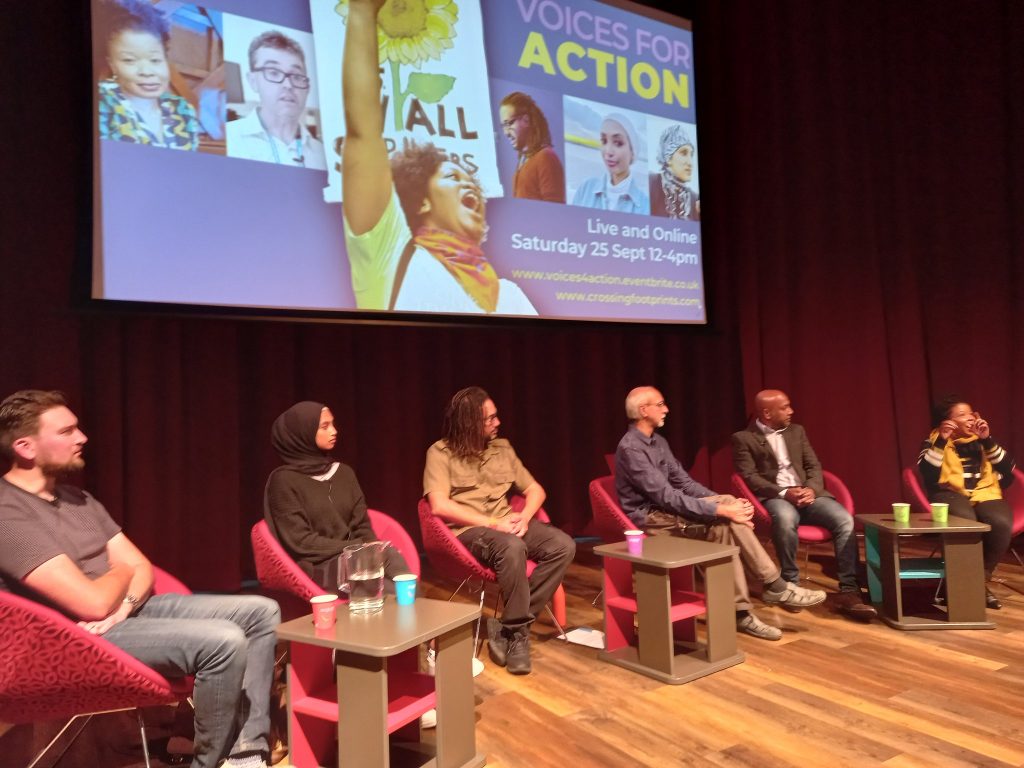 I was there to discuss what activities, structures and processes local concerned citizens of Oldham need to do in the area to generate action on climate and share a little about what CEM have done. This was probably something that I could have spoken about for the whole slot if given a chance and hopefully this is the start of a longer discussion with the community of Oldham rather than a one-off funded event with a free lunch to entice a few passers by.

In my brief slot I mentioned and tried to emphasise two things. Firstly that not all activism has to involve marches, superglue and handcuffs and secondly the need to build the capacity of small groups to put pressure on councils about specific local issues.  This is not to ignore that local issues are linked to a larger global movement to change the systems of extraction, exploitation and consumption. Something else I said is that for small groups endure, they have to confront their emotions, be honest with each other to try to not burn each other out.

What I learnt from my other fellow panellists and audience is that saying that marginalised groups don’t care or know about the effects from climate change is a fallacy – one spouted by our politicians to delay action, retain power and  justify their feelings of shame and guilt from decades of failure. My key take away was a line from Emmanuela’s performance of spoken word to music from the DR Congo that was said to her by her grandmother “Listen to your elders, their breath may stink, but they do not lie”.

The issue of language barriers also came up – not about speaking English, but in how diverse communities understand the impacts of climate change (the language used by professionals is certainly very technical), what action needs to be taken and how to implement those actions. We’ve certainly found the structures of power within the Council a hall of smoke and mirrors with directions in doublespeak just to get simple facts out of them and work out how to let citizens have a voice and seat at the table.

If you’d like to help CEM in any way or would like to get involved in setting up a similar group in Manchester, Oldham or any other GM borough email us: contact@climateemergencymanchester.net