We at CEM are going to try to do a monthly “the month ahead” blog post that captures what is coming up. We are – imaginatively – going to divide it into local, national and international. Apologies if it doesn’t include your group’s Big Event.

Let us know what you think, what you find useful or not – contact@climateemergencymanchester.net

Council and its outriders 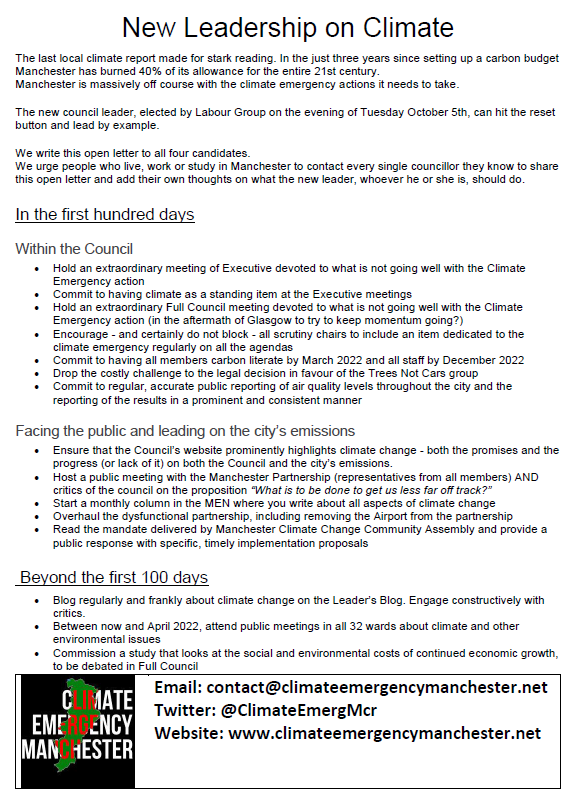 For the first time in 25 years, there will be a new Leader of the Council. Labour Group (94 councillors) votes on

Tuesday night.  Climate Emergency Manchester has released an open letter about some of the things the new leader could do in the first 100 days (and also beyond). We’re asking people to share it with all the councillors they know.

The following week the  six scrutiny committees have their meetings. CEM’s Team SF will be “there” and will write their reports. If you want to get involved, email us on contact@climateemergencymanchester.net

On Wednesday 20th October the Executive meets (see great report here of how last month they ignored the inconvenient fact that 40 per cent of the city’s carbon budget for the 21st century has been burnt through.  On Thursday 21st October, the Planning and Highways Committee meets…

At some point this month, the Council, its incredibly expensive and worse-than-useless “Agency” and the “Partnership” will release some glossy document, with carefully cropped photos of demographically diverse people, ahead of COP26 (see below). It will be full of warm and soothing words about community, diversity and health. The press release will have gushing quotes from people who either don’t know the truth, or can’t afford to say the truth because the Council can hurt the prospects of their various projects.  It will be deliberately and utterly silent on how the carbon budget, created with fanfare and nauseating self-congratulation in late 2018 is now a dead parrot (40% of the budget for the entire 21st century gone in 3 years).

There is a protest march on Sunday 3td October because once again Manchester is hosting the Tory Party conference. The night before there will be another sage-on-the-stage exhortation meeting where we are told to “build a movement to show world leaders…” with lots of “look at me” questions that lead nowhere and pleas to get involved in “planning” a Saturday November 6th rally in St Peter’s Square, at which injustice will be over.

University of Manchester is holding a totally mis-named  “Festival of Climate Action” from 11th to 14th October. Conspicuous in its  absence is anything on the blow out of the local climate budget. Perhaps too awkward for some academics, who have formed and maintained a mutually beneficial relationship with the Council, to tackle?

We’re continuing to do what we do.  We had a letter published in the Evening News about the need for the new leader (see above) to, um, lead in his/her first 100 days. On Saturday 9th October, from 1.30pm to 4pm some of the core group will be eating pizza and drinking beer at The Sandbar, on Grosvenor St.  Come say hello, meet us, and more importantly, meet other people who want to take local action on the shitshow that is local climate politics.  We will continue to scrutinise the council (since Labour Group is the Council/doesn’t have the stomach for actual scrutiny).

There will be lots of bluster about COP26 and the actions taken by the UK to reduce its emissions. Oh joy.

Friends of the Earth – dunno, couldn’t figure out from their website what they want folks to do.

Insulate Britain will doubtless be continuing their actions blocking motorways.

#COP26 nonsense is going to be pervasive.  Whatever expectations you have of COP26, please lower them now.

On Saturday October 16th there is another “ClimateLIve” concert around the world.

What is to be done?

Get involved in a functional group with realistic (but ambitious) aims and a track record of people leaving in better condition than when they joined (see Dan Savage’s campsite rule).  CEM is mostly functional. Or less dysfunctional than some other groups, anyway. We can find uses for your hour a week/month. Either email us on contact@climateemergencymanchester.net or else come on down to the Sandbar on Saturday 9th October between 1.30pm and 4pm.