As COP 26 continues, and protestors who marched on Saturday are (hopefully) thinking ‘what next?’, we are keeping eyes on Manchester City Council’s scrutiny committees. Are they taking the climate emergency seriously? Here’s what to expect. And remember, if you want to get beyond the post-COP blues (coming all our way soon) then getting involved in Team Scrutiny could be for you. 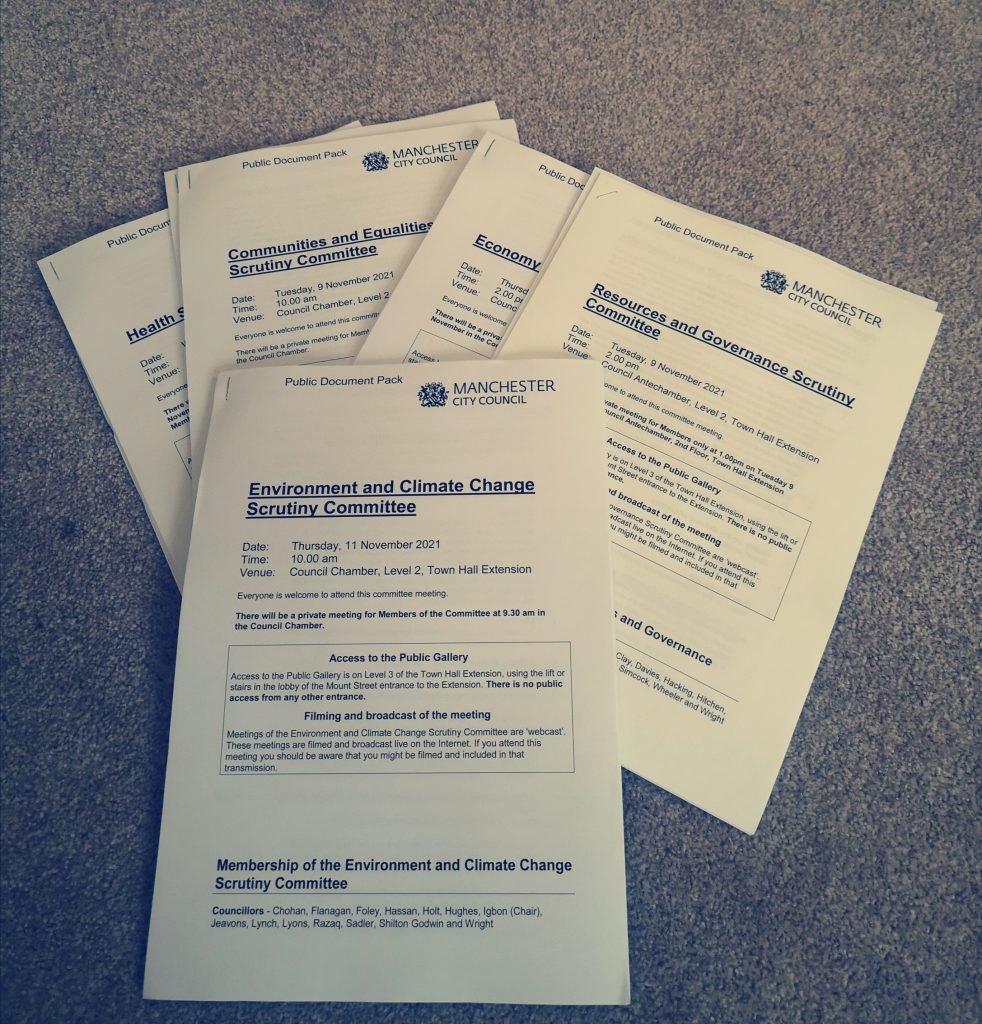 Communities and Equalities – might climate come on the agenda?

There’s an agenda item about how the climate emergency connects with the remit of the committee. It discusses different issues that the committee could discuss in more depth in the context of climate change, such as the cultural and voluntary sector, libraries, leisure and sport, and more. What will Councillors consider most important? What might they deem less important? And when will further scrutiny be scheduled? We need changes across so many areas sooner rather than later. Given that a very similar report was brought to the committee in June, why is this exercise being repeated, and will the committee ever get out of the cycle of thinking about what we could look at, then thinking about what we could look at?

Resources and Governance – no money for Council housing retrofits?

Council housing is coming back in-house, and this will be considered at the committee. The report makes clear that retrofitting the Council housing is important to provide improvements for tenants and to advance the low carbon agenda. But then it states that there is hardly any money for it. The budget they drew up “does allow for some investment in schemes that support the carbon agenda [but] it does not allow for any costs to fund carbon reduction retrofitting of stock to achieve zero carbon; initial estimates are that this will cost c£25k per property which is unaffordable within the business plan and will only be possible if significant external grant funding is made available.” This clearly isn’t good enough, so what can be done? Councillors will need to ask questions.

Economy – how sustainable are the universities?

There are substantial reports about the higher education sector and its contribution to Manchester’s economy. But academics are regularly flying to conferences, the universities are increasingly reliant on international student fees, and they love demolishing buildings to build new ones. On the other hand, the universities do have a positive role to play in providing education and research for the needed transition. Will the environmental and carbon impacts of Manchester’s higher education ‘business model’ be seriously discussed as part of this week’s scrutiny?

Meanwhile, will a date ever be set for the economics of the airport report, which is still languishing in development hell? There is a risk that the committee ignores the airport until the great reset button is pushed in May, with the new post-Municipal elections committee, and then it can either be dropped altogether or continue to be kicked down the road.

Caring jobs are green jobs, but this connection is often missed. The committee will talk about various parts of the care system. The links to our changing climate might not be discussed explicitly, but they will be there, as feminist climate activists pushing for a green new deal have pointed out.

Environment and Climate Change – will estates and neighbourhoods be low carbon and defended from floods?

Three significant agenda items address flood prevention and management, the neighbourhood teams who are tasked with supporting the zero carbon agenda across different parts of the city, and decarbonisation of the Council’s estate. Hopefully these reports are more accurate than the Council’s misleading promotional video that we spoofed – might that even get an (oblique) mention during the committee? Some feathers will have been ruffled.

Children and Young People – no discussion of climate?

As Mike Franks has already written, the committee is not taking the climate emergency seriously in this agenda. Will this pattern continue during this month’s discussion as well? Given the voices of the youth have been calling for change all last week, we really do hope not!

We’re aiming to report back on all these committee meetings via Team Scrutiny Fabulous. But we always need more helpers and volunteers. If you’re interested in getting involved in rewarding climate activism that keeps tabs on local climate (in)action, then send us an email and we can talk about ways to work together.