In the run up to our event on Health and the Climate Crisis on Tuesday 8th February, we’re speaking to other folk who are thinking about these connections – and what is to be done. Today we speak to Chris Thomas, whose new book ‘The Five Health Frontiers: A New Radical Blueprint’ is out now with Pluto Press

Hello, tell us a bit about yourself and the path that took you to where you are now. 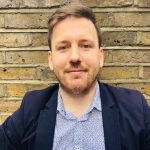 I came to writing the Five Health Frontiers on the back of almost a decade of public health research. I started life at big, national charities – Cancer Research UK and Macmillan Cancer Support. More recently, I’ve spent several years at the Institute for Public Policy Research. In-between that, there was a very short stint with the civil service, but it didn’t quite stick!

Congratulations on your new book ‘The Five Health Frontiers: A New Radical Blueprint’ (Pluto Press). In it you argue that health has often been chalked up as a ‘win’ by the UK, and by the left in particular. Can you explain what you mean by that? What particular blind spots and failures has this led to?

The NHS has a very interesting place in the left’s consciousness. Whereas on other agendas, we’re dissatisfied by the (often neoliberal) status quo, the NHS is the left’s case study of democratic socialism in action.

This impacts the kinds of campaigns we see in health. Whereas in climate and economy, the focus is on radical changes to the fundamentals of how our country operates, campaigns on health are more defensive. We focus on ‘save our NHS’ – essentially, a line that is about conserving the status quo, rather than fundamentally changing how our public health system works!

I love our NHS, and I don’t disagree that saving it is important. But this has led to two failures. The first is that it often leads us to look for things that might suddenly destroy the NHS – a trade deal with the US, the new health bill. But the far more existential risk to our health service is what I call a ‘buy-out’ – people opting-out from public healthcare, because of waiting lists, or poor quality, or bed experiences. This would create a two-tier system – see dentistry or education – that fundamentally undermines Bevan’s original mission. Averting that requires a slightly different activism, based on thinking about how we reform and revitalise the NHS, rather than just save it. That is, it’s time to combine our traditional focus on ownership models, with a more forward-thinking plan on how we ‘universalise the best’ in the 21st century.

The second is that this leads us to a narrow definition of health, focused very explicitly on the NHS. I call this NHS-centrism: health equals healthcare equals hospitals. Yet evidence shows 80 per cent of what drives injustice in health is about what happens outside hospitals. It’s about healthy work, education, incomes, housing, poverty and inequality. Covid-19 has only further exemplified this. If health is to be a platform to campaign on justice, we must not so artificially limit our horizons. We must talk more broadly than just healthcare.

You also make the case for ‘Public Health Net Zero’. How exactly would this differ from the approach we have now?

Lots of public health campaigns focus on specific sectors or businesses – normally, ones that do significant harm, and provide little social value: tobacco, alcohol, gambling. But the reality is that our health isn’t undermined by one or two ‘bad eggs’. Rather, it’s undermined by our economic model.

As climate activists have been brilliant at pointing out, GDP is a big problem. From a health perspective, it values the business activities that make us sick – whether exploitative employment, or the manufacture of cigarettes. And then it also counts the activities that result from our illness – hospital activity, GP appointments. Of course, if government were to act to protect our health through regulation, tax or public ownership, this means they’d take a double hit to GDP – a big disincentive!

Public Health Net Zero is proposed as a target, to help balance this skew towards health exploitation. It describes a situation where health cannot be exploited for profit. In support of that, I am a big proponent of taking unhealthy products into public ownership; of expanding health taxes on manufacturers; and of far more extensive regulation.

We know that health and the climate crisis are interlinked. Some of these connections are now getting wider public attention – for example, issues around air quality. But what are the intersections that have not received as much coverage to date? (but should!)

I think we need to talk more about how climate emergency is leading to huge, huge health vulnerability – nationally and globally.

Global health vulnerability is growing incredibly quickly. A child born today can expect to experience two more Covid-19 scale health shocks in their life – before we even talk about anti-microbial resistance, the impact of pollution or the consequences of an aging population.

The risk factors driving that are exactly the same as the risk factors for climate emergency. It is about C02 admissions, travel and trade systems, deforestation, habitat loss. I think, just as we’ve begun to think about the ‘boundaries’ of the planet, we need to think about what is sustainable for global public health. A public health donut, perhaps, to go alongside Kate Raworth’s brilliant model.

Changes to health and social care systems can sometimes feel like the preserve of policymakers. What can citizens and social movements do to help bring about changes in our approach to health that will also help tackle the climate emergency? What will be the biggest challenge they face?

Research is clear on this. We need more activists, more rebels, in health. Rebels are key to changing the terms of discourse, and ensuring ambitious change. I don’t think there’s been any significant, positive change in history without them.

Yet, health is so often talked in a siloed and technocratic way. To some extent, this is on purpose. The sector can be rather snobby about politics and activism. Leave it to the experts has lots of supporters in the health sector.

That’s why public engagement in ideas beyond ‘save our NHS’ is so low. And it’s also why there is no-one blocking traffic, or putting up posters, or handing out leaflets on the basis of core health inequalities. Those working on health, towards progressive ends, should see that as a major failure in our work this century. Because it is a key reason nothing is changing, despite gross levels of inequality.

It’s time for it health justice to be a basis and justification for changes to how society works, fundamentally. That would help with popular appeal. And this would far better align it with the language and goals of the climate movement. For those in the health space, that means developing far bigger ideas; talking in the language of justice; and far more work to support grassroots movement building.

There is huge scope for collaboration with climate activists. There are so many mutual wins – where health is a foundation for sustainability, and vice versa. And we know a health framing is a very effective way to secure public support for new policy ideas. So this can only help benefit our mutual aims.

You set out a wider national vision. But are there demands that those of us working at the local level should make? We’re based in Greater Manchester with a more devolved health system. Does that make a difference?

I think local action is key. My sense is that some national consistency is important, in terms of mission and strategy. But the ideas in my book – universal public health services, intervention on health exploitation, reform to health and social care – are all designed to be compatible with devolution. Anyone looking at my ideas for practical application should always ask ‘what is the most local level we can implement this change’

Indeed, devolution in Manchester might even mean you have more chance of real change – through the Mayor rather than a Conservative government. 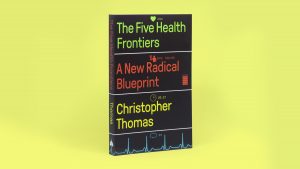 You can find the Five Health Frontiers at Pluto Press here. It is intended as a provocation, in part, to begin developing a more ambitious consensus on where we go next. That might mean there is still stuff to develop, and agreement to be found – but I’d love to hear from anyone interested in working that through!