Ahead of our event Health and the Climate Crisis on February 8th, we’re sharing stories of groups and individuals tackling these connections. Here we say hello to workers co-op Myco who are want to show that another, healthier food system is possible. Watch out for a longer conversation with them later this month! 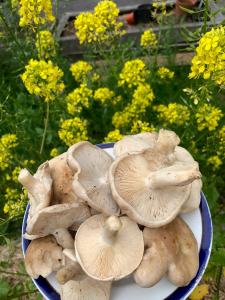 Hello, who are you and where are you based?

We are Myco: Manchester Mushroom Cooperative, a workers co-op setting up a community mushroom farm and mycology lab.

In a nutshell, what have you been up to over the past year?

We’ve mainly been building! At the start of last year we were growing oyster mushrooms in a grow tent in our basement from waste products like coffee grounds, and then selling them through the Platt Fields Market Garden (PFMG) veg box scheme. In March last year we began collaborating with PFMG to build a much larger farm by retrofitting two used shipping containers. We’ve done this all ourselves for the most part, and we’re now just about to get the electricity and water hooked up to start growing again!

And what’s coming up next year?

Now that we’re going to be growing again we’re really keen to get more people involved and feeling that they are the community part of the community farm. We know that our small farm isn’t going to be able to feed everyone, and can’t compete with supermarkets. What we can do is help build a greater understanding of fungi as food and agroecological partners. We want the farm to be linked in with other growing and woodworking projects in the city so that we’re operating in an ecological way, and closing the loop as much as we can. We feel like the coop will be successful if it’s effectively mimicking fungi, as recyclers, network builders and sharers.

How can people get involved?

We’ve already been blown away by how many people are keen to volunteer, which I think speaks to the burgeoning desire that people have to know more about fungi, and build a stronger relationship with the land more generally. If people are interested in volunteering, whatever their skills or knowledge, they can let us know via this form. We’re also running a crowdfunder to help build the community lab, which you can read more about here. Otherwise they can find us on Instagram and Facebook at @mycomanchester for posts about the projects, what we’ve got on and enjoyable mushroom info!