Possibly the least enticing blog post headline of all time, but this stuff matters, no matter how you (don’t) dress it up…

Climate Emergency Manchester has produced a 9 page  report which asks many specific and probing questions of a recent climate report. Working with CEM supporters, and quoting from work by Claire Stocks and Hannah Knox, CEM has produced the report for members of the public and also for members of the Neighbourhoods and Environment Scrutiny Committee (NESC).

Tomorrow (Wednesday 17th July,) at 1pm, Climate Emergency Manchester will meet at the Waterhouse Pub (67-71 Princess St) for mingling and drinks before heading over to the meeting of the NESC, which runs from3 to 4pm.  There’s a really packed agenda.

The NESC is one of six scrutiny committees of Manchester City Council, tasked with making sure the Council is keeping promises on issues. The Manchester Climate Change Agency – a community interest company established by Manchester City Council and its allies – last week admitted that there had only been a 2.5% reduction in the City’s emissions, missing the 13% target by a country mile. Their report is the subject of the CEM scrutiny. Copies have been sent, separately, to all 18 members of the Scrutiny Committee. 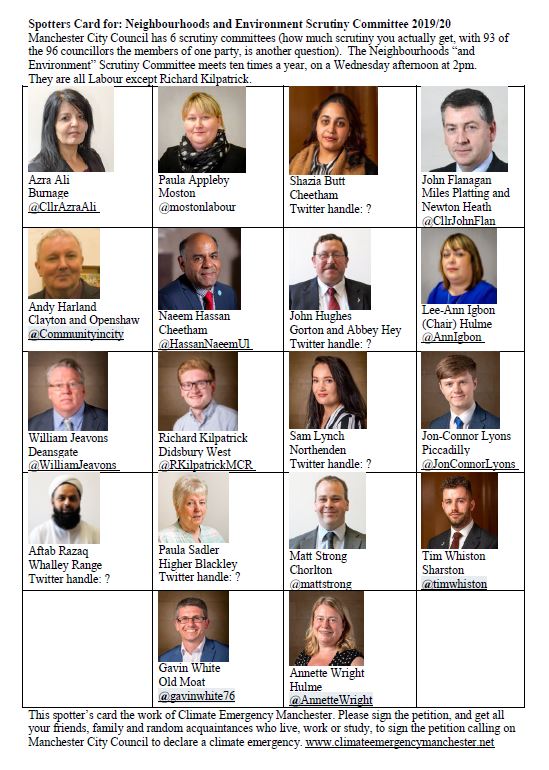