A year ago tomorrow, 10th July 2019, the 96 Councillors of Manchester City Council voted to declare a “climate emergency”.

A whole lot was supposed to change.  Things were definitely going to change.

Anyone who has been paying attention knows that very very little has changed (Teresa May might look at the whole situation and say “nothing has changed!”) 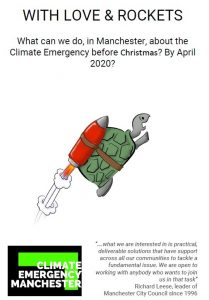 We at Climate Emergency Manchester have produced Hung Drawn and Quarterly reports. We’ve sent good ideas provided from people in Manchester to the Council in a report called “With Love and Rockets.” Their response was… crickets…

Yes, there is now a “Zero Carbon Coordination Committee” for senior council bureaucrats (actually just a reheating of a previous “Environmental Strategy Programme Board” they ran from the late 2000s until they lost interest in about 2015).

There is a small and relatively powerless subgroup of councillors, which has met twice and probably won’t meet again until November (2020).

So, all this presents a bit of a problem for the Press Release monkeys at the City Council.  They know there may be some press interest, and that the campaigners won’t have forgotten.  So, something like this is on the cards.  We shall see.

Recently we became one of 8 global cities selected for the new ‘City-Business Climate Alliance’! A new 3-year project to increase the number of Mcr businesses taking action to become zero carbon. #CityBusinessClimateAlliance#CBCA”

And oh, here’s a photo of the big tower to do with our Civic Quarter Heat Network Energy Centre

And we “cut” the Council’s emissions by 48% (austerity and grid decarbonisation had nothing to do with it at all, whatsoever, nosiree)
Er, we’re hiring someone.
Oh, and “a citywide communications campaign has been designed and is ready to be rolled out at an appropriate time.”
Also (rustles through papers) , here’s a pledge written by/for some children that puts the onus for action on the most vulnerable and least-responsible among us.

The Executive Member for the Environment, Transport and Planning said

“Criticisms of our actions are uninformed, myth-making and fake news. We did a consultation recently and found that most people who replied are very happy indeed with us. Especially after we labelled the nasty comments as neutral, as we did for the Hyde Road “consultation.“ [FOR THE SAKE OF CLARITY THIS IS NOT A REAL QUOTE. THE POINT IS IT COULD BE]

The point is that we as campaigners know this. We mustn’t let us demoralise us (anger and/or exasperate, sure, but demoralise, no).

We have to keep on keeping on, while also innovating.

We as CEM have a petition for a seventh scrutiny committee you can sign here if you live,work or study within Manchester City Council’s boundaries. Please share it.

And tomorrow, we’re going to be asking you to write personal emails to your councillors…

On Monday 20th July, at 8pm we’re having an online meeting- contact us for the password, via  contact@climateemergencymanchester.net